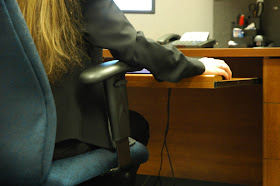 I love The Voice, that TV program where people sing and try to get a coach/mentor’s chair to turn for them. And last time I watched, I had this epic thought. Wouldn’t it be cool if writers had something like that? We could read the first two minutes or so of a manuscript and try to make famous agents in our genre turn a chair for us.

That epic thought was immediately followed by a sobering thought. Oh, yeah. We do have that. It’s called a query.

If you’ve gone down the agent stream, sending out queries by the boatload, then you know how difficult it is to get an agent to pick you. But maybe we spend more time on the query and not enough on the manuscript. All you really need is to get an agent to read the first 250 words of your manuscript and pause long enough to think, “There is promise here. I want to read more.”

So what turns an agent’s chair?

Yeah, I know. Pretty obvious, right? But I’m not talking about simply a good voice. After all, plenty of singers have good voices and nobody turns. But a unique voice? A voice that gives an audience something they’ve never heard before? That’s golden.

It’s the same with writing. Plenty of writing is good. But a voice that grabs a reader and won’t let go? Something unusual and desperately authentic? That’s the kind of voice in a manuscript that will stop an agent in his or her tracks. Plot problems can be fixed; a forgettable voice with a great plot will ultimately be a forgettable story.

It’s not easy to master voice. That’s why you need to write, and write, and write some more. Feedback and critique are critical. But let’s assume that at last, you have the voice down. Now the Battle Rounds are coming and you need to step up your game to stand out in the crowd of great writers. You need story.


Yeah, I know. I did it again. But if it’s so obvious, why do we keep making the mistake of offering the same old, same old? On The Voice, a coach will often say to a singer, “You have to make it your own.” Someone’s chosen a great song, a classic song, but if the singer performs it the same way it’s already been sung, where’s the thrill in that? Writers must do the same.

Mystery, romance, adventure, they all have a basic plot. The trick for you, the writer, is to take a story and make it your own. You have to give an agent—and readers—something that’s both familiar and yet different. Your story must surprise the reader, go somewhere unexpected. If your writing is following a well-worn path, there’s no thrill. And no agent interest. So read, read, and read still more. Knowing what’s out there will keep you from telling the same old story.


Whether you’re a singer or a writer, it all comes down to voice and story. It really is that simple.