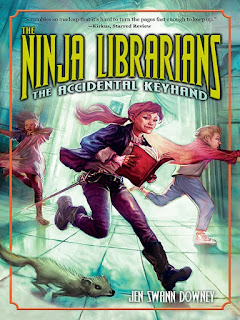 As I read through her work, I noticed that she had plenty of details. We know her character’s hobbies, her favorite class and the things that she regrets. In a sense, it feels like it should be enough but somehow it isn’t. As much detail as she’s provided, it all still feels very superficial.

I’d love to say that I was wildly helpful. But I wasn’t.

Here is how it works using the book that I’m currently reading – Ninja Librarians: The Accidental Keyhand by Jen Swann Downey. When Dorrie catches bullying Tiffany making fun of her favorite librarian and swordplay teacher, she sticks up to the other girl and finds herself challenged to a duel. What is Dorrie feeling when she discovers what the other girl is up to?

Her first emotion is outrage at what Tiffany is saying about Mr. Kornberger. How can she be so mean? But it goes deeper than this.

Her second emotion is embarrassment. After all, Mr. Kornberger can be so . . . corny. Dorrie never sticks up to Tiffany. For the argument to go from disagreement to duel there has to be still more.

Dorrie is also frightened. Why? Because she does her best to emulate Mr. Kornberger. If he is embarrassment that Tiffany thinks he is, then what about Dorrie? Does this mean that she’s ridiculous too?

Now, if you’ll excuse me, I have an e-mail to send to my writing buddy. I think this might be the fix she needs for her story. After that, I have a character’s life to complicate.

Sue is the instructor for our course, Writing Nonfiction for Children and Young Adults. The next session begins on January 11, 2016.
Sue Bradford Edwards at 1:00 AM
Share