Pay Attention to the No 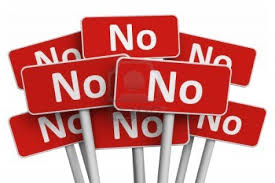 Interested in writing for a specific magazine, I asked an acquaintance involved with it if they were looking for freelance contributors. I was treated to a rant on his horrible experiences working with freelancers and the subpar quality of freelance work. So...

Fast forward two years. Two years that I ignored this market -- because they didn't want freelancers, right? Last week I ran into the magazine's editor and she mentioned a writer we both know coming to work for the magazine. When I replied that it would be a good thing for the magazine since they didn't like working with freelancers she looked at me like I had two heads.

"What we really need is a freelancer who can come to us with ideas. Do you have ideas?"

"Definitely. And I'll keep you in mind when we need a writer for an idea we come up with."

Seriously? Seriously! Did I just waste two years because I took the words of someone (not the magazine's editor) on their relationship with freelancers? Was the magazine's editor standing in this hallway asking me to shower her with ideas and putting me on her to-call list after a five minute conversation?

If you take anything away from this story let it be: pay attention to the no.

Have you ever written off a market or job because you mistakenly heard "no"?
Jodi Webb at 12:30 AM
Share