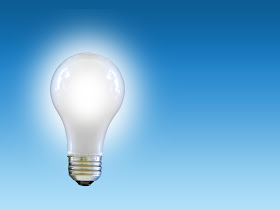 I was a big fan of the Animaniac cartoons. (Um...yeah. I spent hours watching them while writing up this post. Still a big fan.)

So as I head out to a writer’s conference next week, I find myself thinking about good ideas and bad ideas, and how sometimes, the difference between the two can be a very small thing indeed.

Sure, you want to stand out, grab an editor or agent’s attention. But keep it professional, and keep in mind that for the most part, you’ll be giving your business card to other writers you meet. If you want to be remembered, add your photo, not pink glow-in-the-dark glitter.

Good Idea: Take notes and ask questions in the workshops you attend.

Of course you want to get your money’s worth at every workshop you attend. You want to be the best writer you can be and if you don’t understand something, you need to ask questions, right? Well, sort of. The thing is, asking questions is like imbibing in adult beverages: you can get obnoxious fast if you don’t realize when to say when.

Good Idea: Be friendly and approachable and make new friends.

Bad Idea: Be friendly and meet lots of new people and then forget them five minutes later.

I know it’s hard to remember names and faces, especially when you’re nervous about meeting new people. But make an effort to be in the moment, to focus on the person you’re meeting instead of thinking of a hundred different things. Engage in conversation, even if it’s brief, and you’re more likely to remember that new person. And hey, if you struggle with what to say, ask for a business card!

Good Idea: Follow up on opportunities from the conference.

Bad Idea: Follow an agent or editor on social media to the point where you’re referred to as “Creepy Stalker Writer.”

Look, it’s fine to connect with professionals on Facebook and Twitter. They expect that sort of social media interaction. But don’t make a nuisance of yourself; you are not their new best friend. You are one of many writers they’ve just met, and if you really want to make a connection, work on your craft, then follow up on that opportunity to submit. You might be surprised where that connection leads!

I’m sure that I’ve barely scratched the surface of Good Ideas/Bad Ideas when it comes to conferences, so come play! I’ll gladly give you my (cousin) Penny for your thoughts!