Review of Vignettes of Yvette at Vi: A Love Story of a Husband for His Wife by 94-year-old author John Gurley 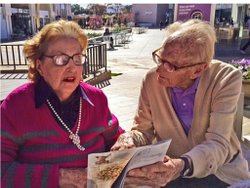 After his wife Yvette’s diagnosis of dementia, John Gurley, Ph.D., estimates he walked 1,200 miles from his apartment to the Memory Unit to visit her in the 32 months before her death in December 2014. As he helped care for Yvette, along with the help of a loving nurse named Carmen, he learned of ways to keep his wife of 69 years active, as well as some frank truths about the reality of dementia. The result was a Vignettes of Yvette at Vi: A Love Story of a Husband for his Wife. After that initial publication, Gurley went on to write and publish: 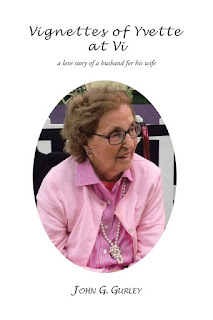 About Vignettes of Yvette at Vi:

This is a true story of how John felt and reacted to the decline of his wife, Yvette, into the quicksands of dementia. The story relates how he, Carmen (the companion to Yvette), and others struggled, sometimes against "wise counsel" to prevent Yvette from sliding downhill, mentally and physically. Their love for Yvette gave them the incentive and the energy to fight against the odds and to achieve some positive results. Really, though, this is a love story of a husband for his wife, together for 69 years.

Of course, in a way, Yvette knows me. I’ve been here almost every day fro 22 months. But does she know that she’s married to me? Not to mention the 68 years. When she sees me, she usually smiles. I love those smiles, but I don’t count them as definitive, since she smiles at many people. I may simply be a familiar face. –From Vignettes of Yvette at Vi

To say that this book tugged at my heartstrings is an understatement. I know that for me personally, dementia is a diagnosis I fear as I grow older. Most of us have all known someone with dementia or Alzheimer’s disease, and watching it progress is a heartbreaking process for all involved. As her dementia progressed, many of Yvette’s friends stopped visiting her, preferring to “remember her the way she was.” Gurley describes the effects of dementia on Yvette, but also outlines ways he and Yvette’s nurse Carmen worked to “give her a new day, every day,” even after doctors said the only thing left to do was work to keep Yvette “comfortable.” For example, Carmen dressed Yvette in freshly washed and ironed clothes each day and took her for a hair appointment once a week. Gurley and Carmen took her to a local shopping center almost every day and engaged her in discussions about the other shoppers and the stores. They also showed her videos of operatic performances, as she and Gurley had season passes to the San Francisco Opera for most of their marriage.

At 48 pages, Vignettes of Yvette at Vi is chock full of useful information, and is a love story worth reading.

John Gurley, now 94 years old, taught economics at Stanford University for 30 years. Earlier, he taught at Princeton University, and he did economics research with his wife, Yvette, at Brookings Institution in Washington, D. C. During his retirement, he has written several books on astronomy and religion. He and his wife moved to a retirement home near Stanford University in 2005, where he is in independent living and she lived in a memory support unit next door to the retirement home until her death in December 2014.

Renee Roberson is an award-winning freelance writer and editor who also works as a blog tour manager for WOW! Women on Writing. Visit her website at www.finishedpages.com. 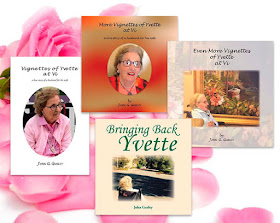