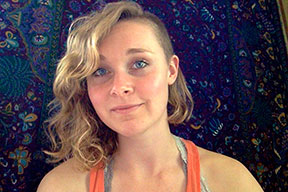 Ellyn’s Bio: Ellyn Hurst is a recent college graduate in biological sciences, but hopes to pursue writing as a full time career. She began writing flash fiction about a year ago as a way to practice story construction, and continues to work on the short bits of fiction whenever time permits. Her piece, The Cloud, has been published with Freeze Frame Fiction, and can be found on her blog, www.ellynapril.wordpress.com. She is also currently finishing the first draft of her novel in the hopes of publication.

If you haven’t done so already, check out Ellyn’s award-winning story “Grey Road,” and then return here for a chat with the author.

WOW!: Congratulations on placing in the Winter 2015 Flash Fiction Contest! What was the inspiration for your short story, or what prompted you to write this particular story?

Ellyn: I've actually been playing with this idea for a long time. It started out as an idea for a novel, but when I sat down to start writing, this is what came out. Someday I'd like to expand the piece, but for now I think I'm happy with how it turned out. It is based on my own grandma, and many of the details are true. She does live on a grey road, and my brother and I grew up calling her Talking Grandma. This is probably my only piece that is based so heavily off of reality, and while it was scary putting it out there for people to read, it was also the most gratifying to write.

WOW!: We’re glad you took the risk, and thank you for sharing it with us! What do you enjoy the most and/or the least about writing?

Ellyn: I love coming up with characters and putting them in difficult situations to see how they would react. It probably sounds a little sadistic, but I'm sure most of you know what I'm talking about.

WOW!: I definitely do! I love that, too.

Ellyn: It's just an amazing escape, writing as different people. I get to be whoever I want.
The thing that I like the least though, I would have to say, is dealing with people who look down at my writing. I get a lot of pressure to go into research or something more lucrative, and it's hard to get people to understand that writing is what I want to do, regardless of how and when it will pay off.

WOW!: I hope you keep pushing past the nay-sayers and keep doing what you love, though I know that’s easier said than done. What have you learned as a student of biological sciences that has helped you as a writer?

Ellyn: I'd say that my time in biology helped my writing in two ways. The first is that I like to write science fiction, and having a strong base in biology, chemistry, and physics has really helped add credibility to my work. The second reason is that going through that degree solidified what I want to do. I was really good in school, but I just didn't find any joy in it until I started taking writing courses. I think if I had gone straight into writing though, I always would have wondered if I would have been happier as a scientist. It's funny how those things work out sometimes.

WOW!: It is funny, but it’s great you had that realization. If you could have dinner with one author, dead or alive, who would it be and why?

Ellyn: That's a tough one. As much as I'd love to say Bukowski or Faulkner, I honestly think I would go with J.K. Rowling. I'm such a Harry Potter nerd, and I would love to pick her brain about her storyboarding methods and how she navigated the modern publishing world. As someone who is about to embark on the scary feat of trying to get a novel published, speaking to someone with first-hand experience in breaking into the field in such a major way would be priceless.

WOW!: What are you reading right now, and why did you choose to read it?

Ellyn: Right now, I'm reading The Water Knife, by Paolo Bacigalupi. I think he's a fantastic author, and love his ability to create such realistic worlds. Also, the book is set in the southwestern states, which is where I grew up, so it's pretty cool reading about the places I used to live in an alternate future scenario.

Ellyn: I just want to thank everyone that encouraged me to keep writing, including my amazing husband who is an endless supply of positivity. I also want to say thanks for having me here, it was a pleasure answering these questions, and I wish the next round of contestants the best of luck.

WOW!: The pleasure is all ours! Thank you for your thoughtful responses. Good luck with your novel and happy writing!

Interviewed by Anne Greenawalt: follow me on Twitter for a fusion of creative writing and competitive sports with a twist of feminist intent.
Anne Greenawalt at 3:30 AM
Share