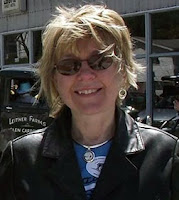 Today we're talking with Cheryl Eichar Jett, runner up in our Winter 2015 Flash Fiction Contest. Read her winning entry, Circus Blood, and then come back here for a fun interview with Cheryl.

Cheryl Eichar Jett is a historian, author, and blogger. Currently working on her sixth nonfiction book for Arcadia Publishing, she is also a regular contributor to several regional publications including a monthly column, “Along Route 66,” in the paper-plus-online www.thebuzzmonthly.com. She blogs about her adventures at www.route66chick.blogspot.com as the Route 66 Chick, a mostly lighthearted look at her travels, Route 66 and other history, and Route 66 events and tourism.

As a small child, she learned how to read road maps from her parents and soon put this skill to work in the back seat of the family car on road trips. Many years later, she began writing about history, Route 66, and travel and found herself published. She believes there’s a connection between the two.

Between then and now, this daughter of professional musicians/music educators worked as a salesperson, bookkeeper, music teacher, professional musician, grant writer, and nonprofit executive director. Cheryl holds undergraduate and master’s degrees in history from Southern Illinois University Edwardsville and has done additional study at the Santa Fe Screenwriters Conference (in person) and from the University of Massachusetts Amherst (online).

Now about that fiction! This is her first placement in a fiction writing contest and she feels excited and inspired to aim for more. She has been writing short stories and parts of novels for 30 years. Her stories are usually framed by historical settings and she is drawn to themes of the impact of loss, ties between the past and the present, second chances, new beginnings, and travel (including time).

Cheryl lives in Illinois, where she works on a volunteer basis promoting Route 66 tourism. She is a member of Eville Writers (a play on her city, Edwardsville). In any spare time, she enjoys reading, genealogy, travel, music, and visiting her adult children and grand-dogs.

WOW: Congratulations, Cheryl, and welcome! You've published six non-fiction books through Arcadia Publishing. What are some of the topics you've written about?

Cheryl: All six are community histories. The first two were Alton and a Postcard History of Edwardsville (both cities in Madison County, Illinois), published in 2009. By then, I'd been seriously bitten by the Route 66 bug and approached Arcadia about doing a couple Route 66 histories. Route 66 is a linear community, after all! The result was two consecutive contracts for Route 66 in Madison County and Route 66 in Springfield (Illinois' capital city), both published in 2010. Life got in the way for several years then, with the illness and passing of several loved ones. In 2013, Joe Sonderman, a good friend, fellow Arcadia author, and author of well over a dozen books on Route 66, and I partnered to do Route 66 in Illinois, which covered the 300 miles of the famous highway between Chicago and St. Louis. That one was published in 2014, and the two of us are now working on Route 66 in Kansas, which will complete the Arcadia Route 66 series. I have two more Route 66-related book projects that are roughly outlined, with some research completed – I think those two might go to History Press or Quayside.

WOW: I loved hearing about your job as the "map reader" on childhood family road trips. These days it's almost a lost art. I'm curious if you prefer the paper version of maps when you travel.

Cheryl: Pun intended, I suppose, but I'm all over the map with that! I love paper maps and collect vintage highway maps. But I'm very comfortable with technology as well. I have a Garmin GPS and use the smart phone for directions as well – it depends on my mood and the expediency with which I need to get somewhere!

WOW: Tell us more about your work as a volunteer for Route 66 tourism and why it is such a passion of yours.

Cheryl: Over the past several years I've gotten more and more involved with Route 66 tourism, particularly in Illinois, to the point where I'm serving as president of Illinois Route 66 Blue Carpet Corridor, on the board of directors for Illinois Route 66 Scenic Byway, and as Conference Director for Miles of Possibility: The Edwardsville Route 66 Conference. In June, we held our first annual Blue Carpet Corridor weekend. This involved 18 communities along a portion of the route actually working together to produce a rolling two-day festival. It got good reviews despite a weekend of rain really putting a damper on attendance. One event done for the year! The conference, a rather unique event, is planned for Halloween weekend at a marvelous restored theatre. I'll be involved with Blue Carpet Corridor annually, but the conference is a one-time event.

Route 66 is just a win-win for everyone. Tourists and travelers get interesting places to stop, take photographs, revisit childhood family vacation memories. The businesses and communities along the route benefit from tourism dollars. Those of us that are Route 66 authors or artists get to make a couple bucks to put toward all the gasoline and food we buy traveling the route. And we all get to do something we like.

As far as the pull of Route 66, it is the most famous highway in the world. So much of our American history is tied up with the history of the route, from the Prohibition and liquor-running days of the 1920s to the Okies fleeing the Dust Bowl and driving 66 to California in the 1930s, to the military traffic in the 1940s, to the Famous Fifties with drive-ins and rock and roll, and beyond.

WOW: I always love a story with a traveling circus as the setting. What inspired you to write "Circus Blood?"

Cheryl: I have to be honest here and tell you that the entire first sentence of the story was a writing prompt for another contest several years ago, which I entered but did not place in. “Circus Blood” as I submitted it to WOW! Women on Writing was just as I had written and submitted it to the other contest. I had a good feeling about the story back then and feel so validated that it did so well with WOW! But past that initial sentence prompt, I began to see and feel some parallels with my own father's story. You see, my father was about 30 years older than my mother...he was actually born in 1892...and I was born later on to them. My father, although not abused as the boy in my story was, left home at about that boy's age and went on the road playing piano for silent movies. After the “talkies” came in, he switched to playing vaudeville. As I wrote about the boy with his desire not only to get away from his abusive pa, I felt also that he wanted to honor his mother and other family members' life work by practicing for years with the juggling balls. It was easy enough to equate this in my mind with my dad's musical talent and the young years he spent practicing to be able to go on the road.

WOW: What an interesting history! How do you fit your writing projects into what sounds like a very busy schedule?

Cheryl: This year has become a bit of a tightrope! I wish I could say that I have a very organized method of fitting it all in, but it seems that I spend a few days or a week on the event work and then flip back to writing for a similar time period. Sometimes I treat the event work as my “job” and write to relax in the evenings and on the weekends. I do keep lists, schedules, and calendars of my various projects so that somehow I manage to balance them all. I'm looking forward to less event work and more writing time in 2016. I'm finding so much satisfaction in working on my fiction, and I can hardly express how thrilled I am to have just now placed in the second Top Ten in a row at WOW! After decades of writing fiction with no recognition or encouragement, this is very sweet. I love telling stories that are set anywhere in between the late 1800s up through the '40s or '50s. Kudos to all of you for such a wonderful and useful website, blog, and series of contests!
Renee Roberson at 4:30 AM
Share