Book Review and Giveaway for Unlikely Allies by C.C. Koen

What happens when a single mom’s four-year-old daughter falls in love with Mr. Right and she doesn’t?

Maggie Tyson’s rule: no bad boys. Her incarcerated ex-husband broke her of that attraction. Needing to escape his threats and the scrutiny of the people in her hometown, Maggie relocates to New York City. Determined to not make the same mistakes, she has a mile-long list of dos and don’ts. Unfortunately, her daughter, Cecily, doesn’t like to follow them. When Cecily wanders away from her and right into Rick Stone’s office, Maggie knows he’s the exact type she’s been trying to avoid. Can she resist him or will she succumb to his willful charm?

Rick Stone’s rule: bed them don’t wed them. Running a multibillion dollar business doesn’t leave him with much time to do anything else, particularly with an overbearing grandfather breathing down his neck. But when a man works hard, he needs to play even harder. Voted America’s most eligible bachelor, Rick doesn’t have any problems getting women into his bed—except one.

One will break his heart.

Will he love or leave them?

Unlikely Allies is available in paperback and e-book at Amazon and Barnes and Noble.

C.C. Koen writes contemporary romance with a twist. An avid reader who enjoys mystery and suspense, her stories will never be what you expect. Determined to find adventure in her dreams and life, she enjoys skydiving, sailing and any activity that challenges her. Teacher by day, romance writer at night produce an active imagination that comes to life in her writing. 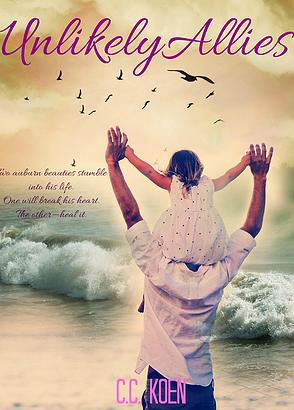 
Rick Stone may be a high-powered executive, but it’s clear from his first encounter with 4-year-old Cecily Bryna Tyson that he has a soft spot for kids. The interactions between Rick and Cece brought a smile to my face time and time again. If only Rick and Cece’s mother felt the same way about each other. The terms “fire and ice” kept coming to mind as their story unfolded. Both characters are extremely stubborn and convinced that a romantic relationship has no place in their lives—but for very different reasons. Maggie is still recovering from a failed marriage that resulted in her ex-husband getting sent to prison, and although Rick definitely has a soft spot for children, he’d choose building his family’s empire and a string of endless one-night stands over settling down any day.

The author did a great job developing some fun characters for Unlikely Allies. Along with Cece, there’s Maggie’s spunky sister, Kat, and Matt, Maggie’s well-meaning boss at the security firm where she works. Matt also happens to be the best friend of Rick, and the two have the comfortable relationship of two guys who respect each other but also disagree quite often. Unlikely Allies also has its fair share of people you’ll detest, such as rich socialite Julia, who’ll do anything to marry Rick, and his fiery and crotchety grandfather, Horatio. Maggie is also studying to be a chef so all the scenes involving the creation of her culinary dishes added an interesting layer to the novel, while subtly creating the illusion that Maggie’s station in life was not quite good enough for someone like Rick Stone. However, I found Maggie to be hard working, admirable, and a darned good mother. She deals with the cards she’s handed with dignity and grace, which is part of why Rick finds himself so attracted to her. The two dodge the expected obstacles most couples in their situation face, with plenty of steamy sexual tension and innuendos thrown in. But in my opinion, it's the sweet and tender relationship between Cece and Rick that really steals the show in Unlikely Allies.

Enter the Rafflecopter form below for a chance to win your own copy of Unlikely Allies.