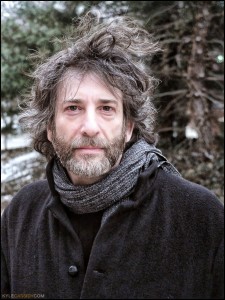 The other night, while watching Jeopardy!, the answer was something like, “He wrote The Ocean at The End of the Lane,” so I yelled, “Neil Gaiman!”

My husband ignored me, waiting for one of the “real” Jeopardy! players to answer. Seconds ticked by.

“I loved that book!” I shouted. “What’re you people, crazy? WHO IS NEIL GAIMAN?”

Time ran out, and Alex said, “That would be Neil Gaiman.”

“Ha!” I said, right in my husband’s face. And then I thought, huh. All three of those players missed Neil Gaiman.

I don’t know about you, but I found that sort of …comforting. I mean, those Jeopardy! people are smart—they know everything! But they didn’t know the multi-with-a-capital-M published author and amazing marketing machine that is Neil Gaiman.

Well, wait, you say. Maybe The Ocean at The End of the Lane was not one of Neil Gaiman’s best efforts. But it was voted Book of the Year in the British National Book Awards.

Oh, so it was just a British sensation, you think. But it got all the way to #1 on the New York Times Best Seller List in hardcover fiction.

Honestly, the man's spoken at packed venues all over the world, still finds time to post on his blog, and he has 2.24 million Twitter followers. And yet, three different people—and not just any people, mind you, these were brilliant Jeopardy! players, for cryin’ out loud—did not know Neil Gaiman, he of the mammoth marketing platform.

So, yeah, I don't feel so bad about my minuscule marketing platform. It's a work in progress, and I'll keep at it, as should you.

Do it anyway. Because the sooner you start marketing and building that platform, the more you'll grow, in the business and with your readers. Just don’t make yourself crazy over it.

Don’t obsessively check rankings on Amazon, or engage publicly (or even privately) with someone who’s written a horrible review about your book. Don’t lose sleep because you forgot to send out your daily 20 tweets, and don’t drive your friends and family to distraction with your constant promotion.

Instead, be realistic in what you can achieve. Make meaningful connections with your readers, and take advantage of opportunities that come your way. Grow a thick skin and always be polite. Hold a steady course and keep writing good books, and perhaps, most importantly, maintain a little perspective.

After all, even the amazing Neil Gaiman has his off days.