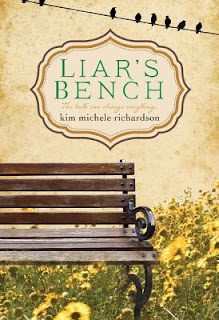 Before I begin my official review, I just want to say: I love this book, Liar's Bench. From page one, it is refreshing and honest and well-written with a voice that leaps off the page and into your living room to take you back in time.

Okay, now to be more official: Liar’s Bench (published by Kensington) by Kim Michele Richardson is a well-crafted, beautifully-written debut novel by Kim Michele Richardson set in 1972 in Peckinpaw, Kentucky. It tells the story of a 17-year-old girl, living in a town full of lies and turmoil, dating back to 1860 when a slave was wrongly hung in front of the courthouse. Kim explores the themes of coming-of-age, racism, civil rights, Southern living, family secrets and more while she makes you fall in love with her main character, Mudas “Muddy” Summers.

The book begins in 1860 when slave Frannie Crow, who works at the Hark Hill Plantation, is accused of poisoning the plantation’s mistress after the overseer rapes her. It’s a shocking beginning but not told in detail. From page one, readers can see they are in the hands of a master writer and are taking that trip back in time. After Frannie is accused, tried and hung, her son used the wood from his mama’s gallows and created a park bench, which was put in the town. People eventually started calling it Liar’s Bench, “its legacy of misfortune drawn from lies, false promises, and tall tales earned the name it kept for good.”

Fast forward to 1972, and on Muddy’s 17th birthday, her mama is found dead, hanging from the rafters of her house. At first, townspeople are saying it's suicide or maybe her no-good, druggie husband (Muddy’s stepfather), Tommy, finally killed her. Muddy’s not sure what happened, but she is determined to find the truth and figure out where her mama’s life went wrong.

Flashbacks and conversations fill in the story of Muddy’s parents and what led to their divorce. Her father is a well-respected prosecuting attorney, whom Muddy has lived with since her mother married Tommy, and he didn’t want her living with them. But Muddy’s father is far from perfect, causing the divorce when he cheated and drank at home. It’s clear he is a man with secrets, but he loves his daughter, hurts for her, and wants to comfort her grief.

Besides the mystery revolving around Muddy’s mama’s death that propels you through the novel, Muddy has a love story, too, as most 17-year-old girls do. When the novel begins, Muddy thinks about Bobby Marshall, whom she says is "almost more than a friend." Racism still runs deep in Peckinpaw, and Bobby faces this in his young life because he is not "quite white." One of his ancestors is Frannie Crow (the slave wrongly hung), and everyone remembers the story of what happened with her—the park bench doesn’t allow anyone to forget.

Kim explores this young love in an authentic and heartwarming way, and scenes between Bobby and Muddy are like a breath of fresh air on a cool, spring Kentucky morning.

Kim lives in Louisville, Kentucky and has written one other book—her memoir, The Unbreakable Child, which is about when she grew up in a Catholic orphanage in the 1960s in Kentucky and suffered abuse by nuns. Besides writing, she is a volunteer for Habitat for Humanity and an advocate for the prevention of child abuse and domestic violence. To find out more about Kim and her books, you can visit her website at http://www.KimmicheleRichardson.com .

Many authors can write a compelling story in a historical setting. But from page one, Kim also creates a world that you can get lost in and come out the other side, learning more about history but also yourself. I highly recommend Liar's Bench, which you can find here!

Want to write a novel yourself? Working on one and not making progress? Check out Margo's monthly novel writing class, which starts the first Friday of every month (June 5!), here. Critiques, craft discussions, and encouragement help you finish that novel!