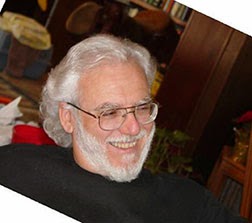 Welcome to Wayne Scheer, our 2nd place winner in the Summer 2014 Flash Fiction Contest for his entry, "Blind Date, 1960." If you haven't read Wayne's award-winning story yet, then you should click here to do so.

Wayne has locked himself in a room he shares with his computer and a turtle. (Wayne’s retirement, not the turtle’s.) To keep from going back to work, he published hundreds of short stories, poems and essays online and in print. He’s been nominated for four Pushcart Prizes and a Best of the Net. Wayne lives in Atlanta with his wife and can be contacted at waynescheer[at]gmail[dot]com.

WOW: Congratulations, Wayne, on winning 2nd place. Tell us where you got the idea for "Blind Date, 1960."

Wayne: Although the actual story is fiction, it's more autobiographical than I care to admit. Where the actual idea for this story came from, who knows? There's a magic land where plot ideas grow on trees, and every once in a while, I go there and pick a ripe story idea. That's as good an explanation for where story ideas come from as I can muster.

WOW: Oh, so you are one of the lucky writers with access to magic land. (winks) Without giving it away, the ending has a bit of a twist and a touch of humor (actually throughout). Is this a pattern you follow in a lot of your stories?

Wayne: I try not to think in terms of patterns. I go where the story and character lead me. I like writing humor, so a lot of my stories are funny, or I at least use humor to relieve the gloom. But sometimes humor isn't appropriate. The same with plot twists. Often they are necessary to a story, and other times they feel gimmicky.

WOW: Great points. Not to mention, you have had a lot of success! You've been nominated for four Pushcart Prizes. What has that been like? Can we read any of those stories online?

Wayne: Many of my stories are online, but to be honest I only remember one story that was nominated and that's probably no longer available. I'm not the most organized person in the world.

WOW: According to your bio, you are retired and write quite a bit! What is your writing routine like?

Wayne: I wake in the morning and go straight to my computer. Of course, that doesn't mean I write all day—I spend a lot of time critiquing stories written by others, playing computer chess and checking baseball news—but I also spend a good deal of time revising old stories and writing new ones. I've also joined a poetry writing group, where I write a poem a day, and I'm in a flash fiction group, where I write a flash story a week. “Blind Date” was probably an under 400-word story originally that was shaped through the years. Many of my stories have been written and revised over time.

WOW: The groups sound great, and they really seem to encourage you to produce new material all the time. What's next for you in your writing life?

Wayne: I've put together one collection of flash stories—Revealing Moments—which includes, “Blind Date.” I'd like to compile another anthology, maybe include some longer stories and poems. Other than that, I want to continue writing whatever feels right and whatever feels like fun for as long as I can.

WOW: Thanks, Wayne. Best of luck to you!

Hey flash fiction writers, we have another contest open. To check out the details and enter before 2/28/2015, go to the contest page.