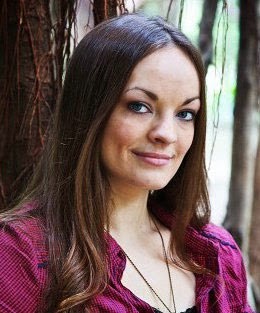 Ellyna Ford Phelps, who writes speculative fiction under the pseudonym L.L. Phelps, is an English Teacher and aspiring novelist. Born and raised in the American South with a few years on a Montana ranch, Ellyna now lives with her husband in Taipei, Taiwan. She occasionally muses about writing on the Taipei Writers’ Group blog, taipeiwritersgroup.wordpress.com, which will soon announce publication of its first Anthology.

You can read Ellyna's winning contest entry here. Find out more about Ellyna, her story, and more in our chat with her below!

WOW: Congratulations on your first place win in our Summer 2014 Flash Fiction competition! What inspired you to enter the contest?

Ellyna: A member of the writing group I’m involved with in Taipei shared a link about the contest almost a year ago, and I've since been following WOW’S Facebook page. I've wanted to enter the contest for a while, but my stories seem to take on a mind of their own, and it’s rare to have one under 750 words. I was excited when Still Breathing met the word count limit, but also nervous, since I knew the story was a bit gritty. I’m glad I decided to enter!

WOW: We're glad that you decided to contribute! Can you tell us what encouraged the idea behind your entry, Still Breathing? It’s a haunting story that really affected me.

Ellyna: For nearly two years now, I've been working on a crime fiction novel about an organized crime family involved with human trafficking over two generations. It’s been a long process, partly because the novel has been developing with my own writing skills, but also because the research required for the project is terrifying and, as you mention with Still Breathing, haunting. There are times when I've had to walk away from the novel, but that action itself always brings me back, as it reminds me of part of the problem with human trafficking. Despite the fact that it’s such a HUGE global and domestic issue, it’s something easy to put out of mind, as it’s often out of sight or hidden cleverly in the open.

Still Breathing started with a memory that kept repeating itself in my mind this past spring, which was the beginning scene, with the elk being gutted and skinned. At the same time, I was fascinated by an organization called Truckers Against Trafficking, who I first heard about through my brother, himself a trucker. This organization trains truckers to help trafficked victims. It’s inspiring, and I knew I wanted to write a story about it. When I finally sat down to write the story this summer, the image of the elk is what came first, and from that Still Breathing poured out. I expected it to be a longer story, maybe 3000 words, but then I realized about 700 words in that it was complete.

WOW: I understand that you plan to give your cash prize to an organization that works with trafficked girls, and are looking for one in North America that goes directly to girls. Have you found a good one that you’d like to share with our readers?

Ellyna: There are a lot of organizations doing wonderful work to fight trafficking worldwide, so it was difficult to decide where to donate. Since the story takes place in North America, I decided to give the cash prize to two organizations that aim to help people trafficked domestically: Truckers Against Trafficking, which inspired the story, and Covenant House, which fights domestic trafficking by reaching out to homeless youth and runaways, who often fall victim to traffickers.

WOW:  Those seem like wonderful organizations, and perhaps our readers will be inspired to check them out. Switching gears, can you tell us what brought you to Taiwan? What’s it like being an English teacher there?

Ellyna: My husband and I get this question a lot! We got married five years ago and moved to Taiwan a week later. My husband knew he wanted to teach English as a second language, and I thought it would be something interesting to try. I was pleasantly surprised to discover that I love teaching, and it has since become a career for me. Taiwan has been very good to us. In our experience, it’s a very safe country with wonderful people. There are jobs available for native English speakers to teach English to all age levels, and English teachers are given national health care and in most cases, a great deal of respect professionally.

WOW:  Thanks so much for chatting with us today, Ellyna. Before you go, can you share your favorite writing tip or advice with our readers?

Ellyna: I usually write fantasy and science fiction, so it’s been a challenge working on my crime fiction novel, as it’s set in the real world and deals with the reality of human trafficking. One quote that always comes to mind when I get frustrated or discouraged is by Holley Gerth: “Be courageous and try to write in a way that scares you little.” Another quote that recently gave me a boost to keep going is from Stephen King. “Stopping a piece of work just because it’s hard, either emotionally or imaginatively, is a bad idea. Sometimes you have to go on when you don’t feel like it…”