Why Is It So Much Fun to Write the Antagonist? 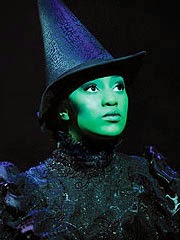 Recently I was teaching an adult education class about characters in a novel, and I said, "Writing the bad guy is so much fun. At least I think it is. I hope I'm not the only one. I think this is normal." The students kindly gave a little laugh, and we went on to talk about famous antagonists and how to write your own bad guy to stand out in the crowd.

Come on,  I'm not alone, right? Some of you out there also love to write your antagonist, don't you? Bad guys are fun to write because they can say and do things your protagonist never could, and these characters are usually what give your novel tension and page-turning action. From Darth Vader to the Wicked Witch of the West, from Cruella DeVille to Voldemort, readers have a love-hate relationship with each one. This is what you're also striving for in your novel. Here are a few things to consider:

Your antagonist needs a redeeming quality or at the very least, a reason readers can understand for their behavior. This is the biggest detail about antagonists to spend time on when thinking about this character in your novel. Why is your bad guy bad? Here's an example. When I was writing my middle-grade novel, Finding My Place, my antagonist, Mrs. Franklin, was mean just to be mean. She didn't have a redeeming quality or reason for her evil ways. Although she was fun to write and gave my 13-year-old heroine a lot of drama, the story wasn't as rich as it could be until I worked on Mrs. Franklin's character.

So, I gave her a reason for her meanness, and this reason was a bit of a redeeming quality, something that readers could possibly relate to. Mrs. Franklin was cruel because she loves her family above all else. Her family is the only important thing to her, and she's willing to treat others badly in order for her family to have comfort and safety during the Siege of Vicksburg (U. S. Civil War, 1863). She takes loyalty to her family to an extreme, which is also something many bad guys do. They have a normal desire (such as inheriting the shoes of your dead sister) to a crazy extreme (trying to kill or enslave a teenage girl to get the shoes).

Your antagonist has a past, favorites, and an appearance, too. In my opinion, it's as important to spend time on a character study of your antagonist as it is on your hero. Writers will pen page upon page of their protagonist's likes and dislikes, family, appearance, and hobbies, and write two sentences about their bad guy--why he's bad and what he does that's evil. But your antagonist had a past too, and he or she also has a favorite color or food, does something in his or her spare time (even if it's making plans to destroy the world, it's still a hobby), and might even like to watch TV. Figure this out before you do too much writing, and even if their love for everything chocolate never makes it into your book, your antagonist will stand out on the page and be a real figure for readers.

Your antagonist may not be a person at all.  Another huge discussion we had in the novel writing class was whether or not an antagonist has to be another human or even paranormal (vampire, zombie) character in your novel. The answer is NO. In my young adult novel, Caught Between Two Curses, the antagonist is the curse. Well, actually, it's two curses that my main character tries to break. Readers could argue that the woman who put the curse on Julie's family is the antagonist, but she plays such a minor role and is not the driving force of tension in Julie's life. You could also argue that it's her boyfriend, Gus; but again, what is blocking Julie from her goal throughout the book? The curses.

How about The Perfect Storm? Although this is based on a true story, the antagonist is the storm. Same for the movie Twister. In Jaws and Jurassic Park, the antagonists are living things, but animals. Heck, your very own loveable flawed hero can even be your antagonist--Mr. Hyde, anyone?

So to sum up. . .have fun writing your bad guy or force of nature or hero with a split personality. Take time to develop this source of tension in your novel, and maybe one day, readers everywhere will be discussing your antagonist the way we have He-Who-Must-Not-Be-Named.

Margo L. Dill is a writing teacher and novelist for kids and teens. She teaches classes in the WOW! Women On Writing classroom about writing novels and writing for children. To check out her upcoming classes, please see http://www.wow-womenonwriting.com/WOWclasses.html . To find out more about her books, including the current holiday sale, please see http://margodill.com/blog/books/ .

Photo above by The Western Sky, www.flickr.com
Margo Dill at 2:39 AM
Share