Nonfiction or Fiction: The Choice to fictionalize real events 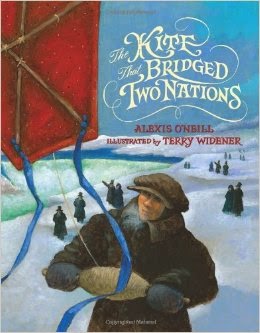 Because I write for children, I read a lot of children’s books.  My recent reading has been limited almost exclusively to picture books and I’ve discovered a wealth of nonfiction gems including Mr. Ferries and His Wheel by Kathryn Gibbs Davis, illustrated by Gilbert Ford (Houghton Mifflin) and The Kite that Bridged Two Nations by Alexis O’Neill, illustrated by Terry Widener (Calkins Creek).

Or at least I assumed they were both nonfiction until I looked more closely and made a surprising discovery.  The Kite that Bridged Two Nations is a fiction book based on a real event.

In the back matter of the book, author Alexis O’Neill explains that her decision to write about the event as fiction was based on what is essential for a gripping story.

Conflict.  A good story has to have conflict.  Homan, the main character, couldn’t simply make a kite, fly it and win the context.  For this story to be picture book worthy, there had to be conflict big enough to bring Homan to a halt before he could even build his kite.  O’Neill introduced needed conflict by creating a disagreement with Homan’s father, who strongly disapproves of his son’s frivolous kite flying.  Do you see what O’Neill has done with this conflict?  Homan not only win’s the contest, his father comes around to see the value of what his son does.  This subplot creates not only needed tension but a warm, satisfying conclusion to the story.

The Catalyst.  All good stories require something to get the main character moving.  O’Neill knew that the drive to win the contest was what brought Homan to achieve the impossible.  But how on earth did he find out about it?  O’Neill created a handbill, typical for the time but not part of the historic record, to bring the contest to Homan’s attention and get the story underway.

Acceptable Risk.  Homan wasn’t an adult but a journey to the Canadian side of the falls stranded the real Homan for 8 days in Canada.  A picture book character separated from parents and family for eight days. Can you say banning and censorship?  Of course you can, if the book would even be published.  To make this Canadian stay more acceptable, O’Neill invented a kind Canadian family who takes him in.

When you find a true story that just won’t work “as is,” consider writing it as fiction.  A story that works as fiction will soar into the hands of your readers.  A story that doesn’t work as nonfiction, simply won’t fly even if it’s about a kite.