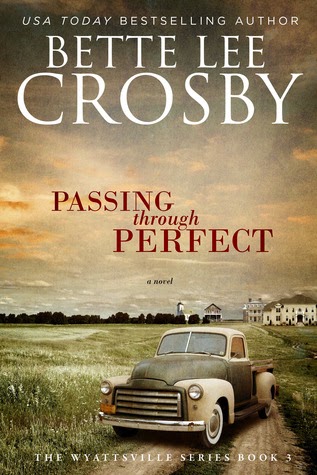 Note: Passing Through Perfect will be released January 10th 2015 but is available for pre-order now: http://betteleecrosby.com/books/passing-perfect/

Overview: Passing through Perfect, Book 3 in the Award-Winning Wyattsville Series

It’s 1946. The war is over. Millions of American soldiers are coming home and Benjamin Church is one of them. After four years of being away he thought things in Alabama would have changed, but they haven’t. Grinder’s Corner is as it’s always been—a hardscrabble burp in the road. It’s not much, but it’s home.

When Benjamin attends a harvest festival in Twin Pines, he catches sight of Delia. Before their first dance ends, he knows for certain she’s the one. They fall madly in love; happily, impatiently, imprudently, in love. It doesn’t matter that her daddy is staunchly opposed to the thought of his daughter marrying a cotton farmer, never mind a poor one.

It’s true Benjamin has little to offer; he’s a sharecropper who will spend his whole life sweating and slaving to do little more than put food on the table. But that’s how things are in Alabama. Benjamin is better off than most; he has a wife, a boy he adores, and a house that doesn’t leak rain. Yes, Benjamin considers himself a lucky man until the fateful night that changes everything.

If I didn’t know better, I would think Passing through Perfect was indeed written by a young black man. The characters were rich and believable, the settings and scenery were perfect to depict the living conditions during the mid-1940’s and once I picked up Passing through Perfect I couldn’t put it down. I was so drawn into the lives of Benjamin and Delia I finished the book the same evening I received it.

Passing through Perfect brought out so many emotions for me as a reader. The racism experienced by the main characters made me tense up and I was angry about the ignorance and injustice of the time. The love between Benjamin and Delia was so strong from the moment he laid eyes on her that my own pulse quickened with excitement about the thought of true love at first sight. These emotional ups and downs were felt throughout the book. I especially love the title of Passing through Perfect because I think we can all relate to a time in our lives that was so absolutely wonderful we wanted it to last forever.

This is definitely a book I would recommend to others; in fact I’ve already told a friend that she absolutely MUST read Passing through Perfect. Whether you’ve read the other books in the Wyattsville Series or not, you’ll find yourself drawn in and enjoying every turn of the page with this fabulous book. Thank you to Bette Lee Crosby for sharing her storytelling time and talents. 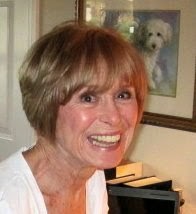 Samantha from Reader’s Favorite raves, “Crosby writes the type of book you can’t stop thinking about long after you put it down.”
“Storytelling is in my blood,” Crosby laughingly admits, “My mom was not a writer, but she was a captivating storyteller, so I find myself using bits and pieces of her voice in most everything I write.”

It is the wit and wisdom of that Southern Mama Crosby brings to her works of fiction; the result is a delightful blend of humor, mystery and romance along with a cast of quirky charters who will steal your heart away. Her work was first recognized in 2006 when she received The National League of American Pen Women Award for a then unpublished manuscript. She has since gone on to win nineteen awards for her work; these include: TheRoyal Palm Literary Award, the FPA President’s Book Award Gold Medal, Reader’s Favorite Award Gold Medal, and the Reviewer’s Choice Award.
Crosby’s published works to date are: Blueberry Hill (2014), Previously Loved Treasures (2014), Jubilee’s Journey (2013), What Matters Most (2013), The Twelfth Child (2012), Life in the Land of IS (2012), Cracks in the Sidewalk (2011), Spare Change (2011). A Cupid inspired romance, Wishing for Wonderful, is scheduled for release in November 2014 and Book Three of The Wyattsville Series, Passing through Perfect, will be be available in January 2015.

Keep up with Bette - find links to her social media by visiting her website: http://betteleecrosby.com/

Crystal is a church musician, business owner, active journaler, writer and blogger, Blog Tour Manager with WOW! Women on Writing, as well as a dairy farmer. She lives in Reedsville, Wisconsin with her husband, three young children (Carmen 7, Andre 6, Breccan 1), two dogs, two rabbits, four little piggies, a handful of cats and kittens, and over 200 Holsteins. The Otto family is expecting an addition with Delphine Elizabeth Otto due March 1st 2015!

You can find Crystal blogging and reviewing books and all sorts of other stuff at: http://bringonlemons.blogspot.com/ and keep up with her WOW! tours and blog posts at: http://muffin.wow-womenonwriting.com/