When Competition Gets Ugly 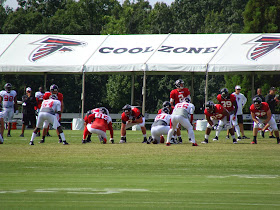 I suppose some folks can watch a football game and knit or fold laundry or write a blog post. But I’m not the kind of fan who can cheer for my team and do something else. When I’m watching football, I’m all in. Screaming, yelling, dancing—well, let’s just say that I’m invested in the outcome of the game.

I call it “competitive.” (The mister calls it “annoying.”)

Competition can be a good thing. It pushes me to work harder, to keep trying, to always give the best that I can give. As a writer, I love the competition of a good literary contest. I love to win prize money and I love the validation from my peers. Every time I make a pitch to a market, every short story I send out in the world, every agent who gets a query, it’s all competition. I want to win acceptance. And there’s nothing wrong with that.

But there’s another kind of competition in the writing world, the kind that can go wrong in a snap, the sort we don’t often talk about: the not-so-friendly competition among our writing peers.

Maybe it’s our writing group. Or maybe it’s the writing friends we’ve made from attending the same conferences, or a bunch of writers that have come together to form a group blog. Heck, it might be a passel of writers we’ve never actually met. And honestly, we might not even realize that we’ve slipped into competing with them. Until the day when a writer in one of our groups has achieved success and we think, “Are you kidding me? Her?” Because what we’re really thinking is, “But I’m the better writer. It should’ve been me.”

Uh-oh. Competition is fixin’ to bring out something ugly in us.

Because once that competitive mindset kicks into full gear, it’s not long before we get…well, fanatical, obsessively dwelling on another person’s writing journey, constantly comparing achievements, allowing someone else’s business to become our business. Ultimately, we can waste a whole lot of hours and energy and brain cells that could’ve been used much more productively. And as grammatically incorrect as the expression is, it comes down to this: “Ain’t nobody got time for that.”

So if you’ve found yourself sliding down that slippery slope, call a time out. The end game is about what you want to achieve; it’s about working hard and believing in yourself. It’s about sticking to your game plan and not worrying about anyone else’s game.

Give a cheer for your friends when they have success, and then get back to your journey. Make competition work for your writing, and before you know it, you’ll be screaming, yelling, and doing the happy dance for your own success!

(But don’t blame me if you’re also a tad annoying.)