Writing In the Right Place At The Right Time 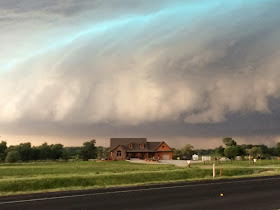 Sometimes, the writing life boils down to being in the right place at the right time.

That's what happened Tuesday. A derecho (a widespread, straight-line windstorm associated with a fast-moving group of severe thunderstorms) swept across Nebraska, dropping pea- to tennis ball-size hail, along with buckets of much-needed precipitation.

Since it was Tuesday, I was busy getting this week's weekly newspaper designed, but when the boss said "Let's go storm chasing," I grabbed the camera, my iPhone and away we went.

We shot  video and stills of incoming clouds and every three or four minutes, I uploaded the media, along with reports of conditions we encoutered, to either Twitter or Facebook so our readers knew what was happening.

Interestingly, our race with Mother Nature paid off. Several major news outlets, including the Weather Channel, NBC News and ABC News, along with regional news outlets, were asking for permission to use my photos and video, as well as my weather updates.

That's part of the thrill of being a journalist. You never know when someone will see your work - whether words or visuals - and want more.