What Did Your Character Do For New Year's? 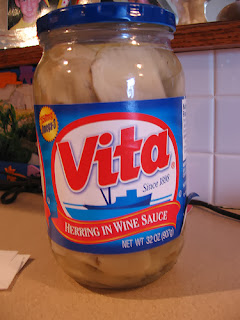 My cousin eats pickled herring on New Year's Eve. My grandma and aunt used to when they were alive--it's supposed to bring you good luck in the New Year. At our Christmas gathering, my cousin explained to me not to get the herring in cream sauce (who would do that?) and just to eat a bite or two. I need to sell my house (Oh, I NEED TO SELL MY HOUSE) and finish my novel and look for an agent in 2014, but I'm not sure if I'm desperate enough to eat pickled herring. I can confess right now that I am not.

You can do a complete character exercise about New Year's Eve:

Does your character go to a party?

When she goes to a party, does she drink it up or stand in the corner?

Does she dress in a formal or jeans?

Who does she kiss at midnight?

Who does she wish she could kiss at midnight?

Does she make resolutions?

Does she stick to them?

Does she eat pickled herring for luck?

Does she hide a coin in black-eyed peas on New Year's Day?

If I answered some of these for a well-known character, such as Rapunzel (I have a three-year-old daughter--can't help myself!), I might say, "Yes, Rapunzel would make resolutions--to get out of the tower at least once a month without the witch noticing, and she would eat pickled herring on New Year's Eve because she needs all the luck she can get. She doesn't get to go to a party on New Year's Eve because she is stuck in the blasted tower, but she dreams of kissing a handsome prince, or anyone actually--because she is super lonely."

My main character, Anna Green, age 13 from the Civil War, would answer the questions in a totally different way, such as: "The only person I would ever want to kiss me at midnight would be Albert, but I hoped he would just kiss me on the cheek. If he kissed me on the lips, I might die of embarrassment. I am making a resolution to learn more recipes during the New Year, but to also make time for my reading and writing. I will not eat anything like pickled herring on New Year's Eve because I once had to eat rats during the Siege. But I love black-eyed peas, and I hope I find the coin this year."

Okay, your turn. Pick a question from above (or two or three) and tell us a bit about a character you love or your own you are writing and his/her New Year's celebrations and resolutions. Happy New Year to you, too! 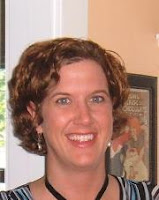 Join Margo in the WOW! classroom in 2014. She is teaching these classes in January: Writing a Novel with a Writing Coach (starts Jan. 3), Writing For Children (about starting and taking hold of your career, starts Jan. 7), Writing a Children's or Teen Novel (starts Jan. 30). It's not too late to sign up! Questions? E-mail Margo at margo (at) wow-womenonwriting.com.

herring photo by roncierge http://www.flickr.com
Margo Dill at 12:30 AM
Share