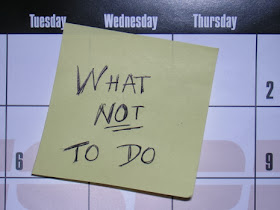 Though I’m already making plans for next year, I’m compelled to take a look back first.

See, I don’t want to make the same mistakes I made this year. So I checked my blog for a feature I call “What Not To Do” where I share my mistakes and what I learned from said mistakes. And I thought maybe you could benefit from my year-end inventory, too. So join me as I walk down Memory Lane, reliving those magical writing moments where I messed up in 2013.


What I Learned About Book-Signings

I finally scheduled a book-signing for a couple of anthologies wherein I had stories. And I thought I’d made thorough plans. But I did not count on the wind (it was an outside festival), and I did not consider the heat (chocolate melts), but mostly, I didn’t really think about the importance of selling the book.

I suppose I thought the book would sell itself. But here’s what I learned: people want to talk to writers about the book—and they want to talk about their own experiences, too. And if you take the time to connect—to listen and interact with the people who drop by—the book sort of does sell itself.

For my next book-signing, I’ll check the weather and I’ll bring melt-proof candy. But mostly, I’ll be ready to engage with shoppers. Because shoppers are the ones who’ll buy—and read—the book!


What I Learned About Proofreading


I don’t often ask for help with proofreading. But after sending a query out to an agent, I realized I’d made an error. And not just a simple comma error. Nope, this was an epic error involving the actual text and…honestly, I still want to bang my head on the desk, thinking about it. How, I asked myself. How did this happen?

It happened because when we write, we often mentally correct an error. We know what we mean to say and our brain helps us out by showing us what we expect to see rather than what’s on the printed page.

So I learned (rather painfully) that I shouldn’t rush the proofreading step. Sometimes, it’s enough to leave the work for an hour or two. An error is likely to jump out when we return. For larger works (like an entire manuscript), there are several options for proofreading. There are premium or free services that will analyze text (search “grammar check”). But we can also ask our fellow writers for proofreading help, perhaps our critique group, or a trusted writer friend. And then we must actually do it. (Your head will thank you.)


What I Learned About Reading Writing Books


In April, I learned that, despite my best intentions, I had read only one of the writing books piled in a stack by my bed. It was an excellent book, filled with great writing advice, and so I decided that I would actually read my writing books instead of letting them sit, hoping that the advice would somehow transfer to my brain through osmosis.

But here’s what I discovered in December of 2013: I still have not read my writing books. So I’m sure you can guess what the first What Not To Do of 2014 will be.

Oh, well. Now that I’ve looked back (and learned) from my mistakes, it’s time to look forward, to figure out my What To Do list for the coming year.