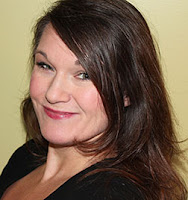 I am excited to introduce you to Shermie Rayne, who won second place in the Spring 2013 Flash Fiction contest with her haunting, vivid, and amazing story, "Revolution." This is one of my favorite flash fiction pieces I've ever read--first because I love the genre, historical fiction, and don't read it much in flash fiction. But most of all, Shermie was able to take a terrifying event and show us less than 750 words how it affected the rest of the main character's life, as well as share the character's emotions and fears. If you haven't read "Revolution" yet, please take the time to do so now right here.

Shermie, a native of Kentucky, currently resides in Virginia with her husband and four children. Other than a futile attempt at penning a True Confessions inspired story at the age of eleven, she is a recent newcomer to the wondrous world of writing. A graduate of Bellarmine University, and a former registered nurse, when Rayne was confronted with the angst of middle age, she decided to try her hand at writing, instead of returning to hospital scrubs.

Although she still reads more than she writes, Rayne has completed a couple short stories and has several novels in various stages of development brewing, including her current project, Faye, a young-adult fantasy novel. If you’d like to follow Rayne along on her writing journey, please visit her blog: http://shermierayne.wordpress.com/.

WOW: Welcome, Shermie! What gave you the inspiration for "Revolution"?

Shermie: I believe the story seed for "Revolution" was planted when I became aware of certain events that occurred to some of the colonial women and girls during the Revolutionary War. Just prior to writing "Revolution," I had recently heard/read of a famous British Army quote from that time period: “The fair nymphs of this isle are in wonderful tribulation…” ~Francis, Lord Rawdon.

It bothered me, or more precisely the history behind the quote’s meaning…well, it angered me. Not because atrocities of that nature didn’t happen, or don’t still happen, but because it had occurred so ostentatiously, with such blatant disregard, here in America. I envisioned being a mother with a young daughter to protect, and from that place of desperation, "Revolution" was born.

WOW: I had never heard that quote before, and really, there are no words when you hear something like that. You responded to it like many writers would--pouring out your heart in a beautiful story. Do you write historical fiction often? Why or why not?

Shermie: While I do enjoy reading historical fiction, I’ve never written it. Because I have a tendency to be thorough and sometimes get “hung up” on the details, I have/had this conception that to write in this genre would be extremely time consuming and tedious because of the absoluteness it requires in authenticity. With that said, I’m a firm believer in the “never say never” motto. In fact, I couldn’t help myself and have a loose outline sketched and plan to continue with "Revolution" and see it through to novel length (someday).

My ultimate hope for my writing is not to be boxed into a genre or category—I want to allow the stories to define themselves and their own placement. The short story I worked on prior to "Revolution" was straight up horror. My current novel-in-progress is fantasy based, while the other stories in waiting range from dystopian to family drama.

WOW: I would love to read a novel version of "Revolution." So, was it hard to pack all that emotion & history into one less-than-750-word story? Why or why not?

Shermie: In all honesty: no, it was not hard. I believe when a writer feels emotion(s) with a piece, the reader will, too. I had an incredibly moving vision with this story and knew it was meant to be shared. I was affected by the unfairness of the circumstance and wanted to give the mother power--and her own form of revolution (which was to hide and protect her daughter). All stories need the element of hope, even in dire circumstances-- and its character(s) need the ability, or the possibility, to remain resolute.

So, I quickly scribbled what I had seen onto legal paper, and from there, added the historical details and what I call “senses layering”, followed by editing (and cutting my word count). I purposely wrote this piece in first person, present tense to accentuate that forward feel of urgency and distraught dismay.

WOW: Thank you so much for sharing your writing process with us. I bet that will help some of our writers out there! According to your bio, you switched from a career in nursing to a career in writing. What made you switch?

Shermie: I was actually in a hiatus from the nursing profession. I had spent the last decade producing and growing a nice, little crop of children. But alas, the time flew by until I had a horrific consternation of realization: my kids were not so little anymore, and they wouldn’t always be so needy. I racked my brain thinking of different avenues to pursue for myself. With my three youngest children, at that time, heading off to jr. kindergarten, third and fifth grades, respectively, I knew I still needed a super flexible schedule, and I just couldn’t see how returning to nursing could work in our busy family life. So, I considered making and selling crafts(I’m not really crafty), working at Lowe's, decluttering other people’s homes, and/or maybe picking out their next paint colors--and then painting their newly decluttered spaces. My list of crazy ideas was boundless! My then eight-year-old daughter had spent that summer continuously writing stories, really excellent and creative stuff—I was so impressed and enamored with her abilities. I became her reader and editor, cooing and gushing over her while also guiding her with pointers and corrections. And, then the big idea hit me: you could write, too! So, I did.

WOW: That is awesome--I love your list of things you could do AND how your daughter inspired you to write. Your bio also mentions you have novels in various stages. So, what's your writing process like?

Shermie: My writing process is ever evolving, But basically boils down to: imagining, writing, and editing. I have been blessed in that the material that I actually want to write comes to me quite easily (so far-- knock on wood). So naturally, this is the best part of the writing process for me, and the aspect that I love the most—there’s nothing like being sucked into a little scene that plays out in your head. So my process begins there and continues in this thinking/imagining mode until I have a loose, but solid, outline.

Inspiration often hits me at very inconvenient times (e.g., the shower or driving), so that by the time that I’m ready to start writing, I have a file folder full of a gazillion hand-written scraps of paper, napkins, Post-its, and sketchy outlines to integrate into the story. I don’t start typing until I have a decent understanding of key characters, and I’ve seen the story’s ending, beginning, and several important scenes (usually in that order). From there, it’s all about imputing the story into the computer. I’m always amazed that there are a lot of details and extra material that spontaneously adds itself to the story along the way. My least favorite aspect of writing would have to be editing (and typing)!

One new tool that I started using with my current novel-in-progress is to keep a novel journal. I read of Sue Grafton using this technique with her novels, so I gave it a try. And it has made all the difference to me. I can flip back to the earliest entries that were written well before I even considered typing, and I can really get a feel for my characters and the story’s needs and wants.

WOW: That sounds a lot like a "novel bible." It is so important to keep notes! It sounds like you are also an avid reader. Can you tell us one or two titles you've read recently that you've really enjoyed?

Shermie: I’d say I’m rather an odd reader, I suppose. Between audiobooks, my Kindle, and actual “real” books, I have to have at least five to seven different books going at once, perhaps this reminds me of my college days, but I enjoy the variety and a wide array of genres.

I was very reluctant to embrace audiobooks at first, believing that I was a visual leaner and I’d not enjoy it; I was completely wrong (thanks, Amy). Audiobooks account for roughly half of my total “reading” time, which allows me to increase the number of books that I’m exposed to. But the greatest benefit: I believe it helps me greatly in my own writing. While visually reading books, one can absorb structure and story flow (which is awesome, too); however, when listening to the cadence of the human voice through storytelling, you can gain the feel for the rhythm and rhyme of words—which definitely can help writers. I love this quote by Virginia Woolf, “Style is a very simple matter; it is all rhythm. Once you get that, you can't use the wrong words.”

I just completed my summer-reading log through my local library system. (You know, trying to set a good example for my kiddos.) From that list of twenty-four books, if I had to choose just two books, I’d say, The Color Purple by Alice Walker and Bird by Bird by Anne Lamott. The former not only because it’s written in epistolary-letter form (which I love), but because the voice of the story rings true; the latter book is actually a wonderfully encouraging and poignant book on writing, which I highly recommend to any writer.

WOW: I love Bird by Bird, too! Thanks for a wonderful interview, Shermie. We wish you the best of luck!

Interview by Margo L. Dill. To find out about Margo and her books, visit www.margodill.com.