Writing the Fiction Series: The Complete Guide For Novels and Novellas by Karen S. Wiesner (Review and Giveaway) 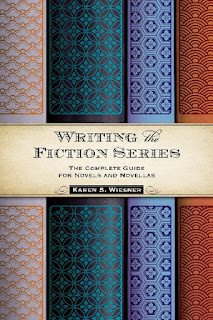 I'm so glad that I have the chance to review Karen Wiesner's new writing guide book, Writing the Fiction Series: The Complete Guide For Novels and Novellas, because I am currently writing book one of a middle-grade mystery series. As Karen says in her introduction, "A better question might be who isn't reading, writing, and publishing a series?" which means that many of you are also probably writing a series—for children or seniors or everyone in-between. Readers love series! So, how will Karen's book help you?

First off, it's a well-researched study on successful series, and it covers multiple genres. I'm thankful for all the series mentions that Karen lists and explains in her book because she provides concrete examples that I can use when thinking about my own series and what I want it to become. For example, in my imagination, my middle-grade mystery series will have the same main character and his family members/friends in each book, and each story will solve a complete mystery. It's different than the Harry Potter series because readers won't have to read book seven to find out the ending to Patrick's (my main characters) story. However, I will still have to be consistent and have him develop through the books. So when Karen discusses "Recurring Character" series, I made notes because it's important to know what I'm writing and find other examples out there. I'm not creating a premise/plot series or a setting series, but now I have even more ideas brewing for other series after reading this chapter!

After you know what you're writing or want to, Karen delves into how to write it. Chapters two, three, and four help with this. If I was to tell you all the useful tips in these chapters, this blog post would go on and on and on. She helps you with your individual story and series arc, develop characters who can stand the test of a series, stay consistent in your series (you will need a series bible!), and how to organize yourself and your series. When I finish the second draft of my book this summer and my critique group gets finished giving me their notes, I plan to use SEVERAL of the tips in chapter four to keep myself organized—believe me, I need it. I'll use tips, such as the series organization worksheets—I'm going to fill one out before I ever start querying this book, ideas for my series bible, and creating maps of my fictional town (and even individual story places such as Grandma's house and Patrick's school).

The other thing this book will do for you (and I've mentioned this a bit already) is give you some ideas that you might not have thought of on your own. I love the idea of a "cameo appearance," which is an idea provided by an author Karen interviewed, Linda Varner Palmer. Linda stated, "Give evidence that the happy endings in earlier books are still in effect, i.e., characters show up in later books and are doing well." I'm already thinking about how Abby in my first book can show up in a later book . . .

At the end of each chapter, writers will find "build your series muscles exercises," which are call-to-action activities and writing prompts for you to do with your own series. In a nutshell, these should force you to work on your series while you are also using this book.

If you already have a series, this book is still useful to you because it can help with marketing your series (chapter 5), including creating your brand, and preparing for the conclusion of a series (chapter 6). Appendix A provides blank worksheets to use on a new or existing series to help with consistency and writing. Appendix B provides case studies of successful series from Twilight to Debbie Macomber's Dakota series to Terry Brooks The Heritage of Shannara. She also takes the seven Harry Potter books and shows authors the overall series arcs, the individual book arcs, and the series plant arcs for each book. This is an incredible resource!

I highly recommend Writing the Fiction Series by Karen Wiesner for anyone writing or considering writing a series! (You can also find more details and resources on Karen's site.)

Margo L. Dill is a children's author and writing instructor for WOW! Women On Writing. To find out more about Margo and her books, visit her website at: http://www.margodill.com.

We are giving away a copy of Writing the Fiction Series: The Complete Guide For Novels and Novellas (Writer's Digest Books, May 30, 2013) by Karen Wiesner. Just fill out the Rafflecopter form below for a chance to win!