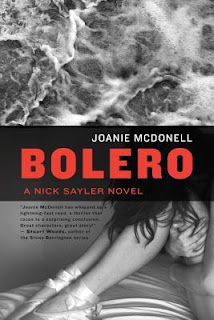 I’m always on the lookout for books that my ten-year-old son and I will both find interesting since it’s always more fun when he can enjoy and discuss a book with a friend . . . or in this case, his mom. But with Father’s Day upon us, it occurred to me that I could extend that search to books that my dad (and husband) would like. And I’ve found the perfect book to fit that bill with Bolero: A Nick Sayler Novel (March, 2013) by Joanie McDonell. As a Father’s Day celebration, McDonell’s publisher Thomas & Mercer is providing us with FIVE copies to give away. Why not enter and share your prize with the dad in your life as a belated Father’s Day gift?

Bolero is the story of a private investigator named Nick Sayler, who surrounds himself with quirky characters and quirky situations (he lives on the Hudson River in a barge that he won in a poker game for starters). Nick is a tough guy with smarts and a soft heart—a Mike Hammer for the new millennium. A naïve intern at Bellevue Hospital drags him into a case involving a patient who was assaulted and lost her memory—the only clue to her identity is one of Nick’s business cards found in her pocket.

This book does a great job of letting Nick Sayler reveal his world—and himself—to us. Along with the mystery of the woman with no name, readers get a peek at a mystery in Nick’s past mostly from his thoughts and flashbacks. And the characters that Nick calls his friends! It would be worth it to read this book if it was just about these memorable people. They are not the standard secondary characters that you often find in detective novels. Each is fully developed, not just playing their part in the solution of the mystery but also having a past as well as thoughts, emotions, and a relationship with Nick that extend beyond this case.

I read a lot of detective books and truthfully, sometimes they begin to merge together. Not Bolero! It is a book full of twists and turns and unforgettable people. McDonell is a writer to watch. She does an excellent job creating a mood. You can feel the tension, the fear, the sadness. And she paints a rich picture of the spots where Nick finds himself: the barge, the hospital, the city streets. If you enjoy solving a mystery that isn’t predictable and like hard boiled detectives or quirky characters, then this is the book for you! This is the first book in the series and I can't wait for book two. 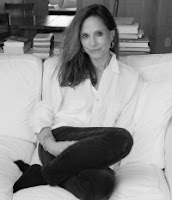 Joanie McDonell, who once spent a lot of time aboard a barge very much like the Dumb Luck, now lives on the beach near the eastern end of Long Island. She's written poems, screenplays, the novel Half Crazy, and The Little Book of Hope. She is currently at work on the next book featuring Private Investigator Nick Sayler.

Enter using the Rafflecopter form below for a chance to win one of FIVE copies of Bolero: A Nick Sayler Novel by Joanie McDonell. Share an enthralling read with the dad in your life!