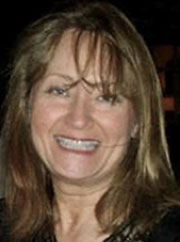 Francine Garson won 2nd place in the Winter 2013 Flash Fiction story with her piece, "Fat." If you haven't had a chance to read this powerful story yet, please check it out here.

Francine won a writing contest at the age of ten with an essay entitled “What Thrift Means to Me.” Since her only experience with money management at that point involved budgeting her weekly allowance, she learned that words, especially when combined with a little imagination, could have power. But life got in the way of her writing dreams. After earning a B.A. in psychology and an M.A. in college student personnel administration, she became a law school administrator, then an independent college counselor, and for a number of years, a full-time mother. When her youngest child left for college, Francine pulled out her old notebooks filled with scribbled words and a stack of clean white paper, and she began to write. And then, continuing her lifelong addiction to reading, she wrote some more. Francine’s fiction and creative nonfiction has been published in a number of e-zines and print magazines. In 2010, her flash fiction received a first place award from the League of American Pen Women.

Today Francine lives in central New Jersey with an even-tempered husband, a moody cat, and a lot of books. She reads, writes, attempts to play the piano, and is very proud of the happy, successful adults her children have become. She is excited and honored to have placed in the WOW! Winter 2013 Flash Fiction Contest. Learn more about Francine at francinegarson.com or connect with her on twitter at @francinegarson.

WOW: Congratulations on your win for "Fat." This is a story all about our perception of ourselves. What made you want to explore this theme?

Francine: Thanks so much, Margo. I'm very excited and honored to have placed in the most recent WOW! flash fiction contest. "Fat" is one of those rare stories that just sprang out of my mind and onto the page. I hadn't really focused on theme as I wrote it. But you're right; it is about "our perception of ourselves" and the disconnect between that perception and reality. Unfortunately, especially for women, that disconnect is quite common. Body dysmorphic disorder is just one extreme and tragic example.

WOW: Why did you choose a flash fiction format to tell this story?

Francine: I tried to write something that would make readers think and feel, even after they had finished my story. I wanted them to experience a particular character's "reality" during a short period of time and then discover the true nature of the situation by means of a twist ending. The flash fiction format, with its laser-like focus, seemed a natural way of telling this particular story.

WOW: Are these themes you often explore in your writing? Any more award-winning stories like this waiting in the wings? (smile)

Francine: Yes and yes, although I don't know that they'll be award-winning. I tend to write about the darker side of everyday life and the secrets we keep, even from ourselves. The notion of identity is another subject that interests me. So yes, "our perception of ourselves" is a recurring theme in my writing. I'm currently working on a longer project incorporating all of these ideas.

WOW: I know you have also won a "big" award. According to your bio: "In 2010, her flash fiction received a first place award from the League of American Pen Women." Tell us about this story. Can we read it anywhere?

Francine: The National League of American Pen Women, through its San Francisco branch, runs a national literary competition in several categories each year. In 2010, my story entitled "She Tells Him" received the first place award for flash fiction. The contest provides cash prizes and the opportunity to read winning entries at the Koret Auditorium in San Francisco. However, the works are not published, leaving the authors free to submit them elsewhere. At present, "She Tells Him" is unpublished.

WOW: You are also an avid reader! What do you enjoy reading?

Francine: How much time do you have? (Laughs). Most of my favorite books would probably be classified as contemporary literary fiction. Tell the Wolves I'm Home by Carol Rifka Brunt and The Dinner by Herman Koch (although it's very disturbing) would be two of my top picks from the past year. I'm also a big fan of the novels of Russell Banks, Tim O'Brien, Stewart O'Nan, Joyce Carol Oates, and Ann Patchett as well as the short stories of Raymond Carver, Ernest Hemingway, Shirley Jackson, Jean Thompson, and Tobias Wolff. (That's actually a very condensed list!) And did I mention that I like Malcolm Gladwell's and Anna Quindlen's nonfiction?

WOW: That's a great list! How does it help your writing?

Francine: Perhaps Stephen King answered that question most eloquently. "If you don't have time to read, you don't have the time (or the tools) to write." Reading has been a way of life for me for as long as I can remember. I don't consciously read in order to learn the craft of writing, but somehow the learning does happen. Osmosis maybe? But more importantly, if I hadn't fell in love with the world of language, story, and character, why would I even want to write?

WOW: Writing has become a "second" or even "third" career for you, after working at universities and raising your children! How is this "new" career fitting for you?

Francine: At this point in my life, I have the time, focus, and determination to make writing a priority. I've unearthed a passion that has been buried for a long time, and I'm lucky to have a supportive family, friends, and community of writers cheering me on. "It's never too late..." is my mantra!

WOW: Thanks, Francine, for sharing yourself with us today!