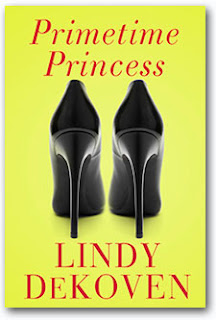 It's been said that literature mirrors real life, so it's only fitting that author Lindy DeKoven draws from her personal experience in the entertainment industry for her debut novel, Primetime Princess.

Alexa Ross has risen to the top of the Hollywood boys' club. As the vice president of comedy development at Hawkeye Broadcasting System, Alexa has put her early years working as an assistant to Jerry Kellner, her sex-crazed former boss, behind her.

However, nepotism lands Jerry a plum spot at HBS . . . reporting to Alexa! Soon Jerry's malicious behavior is destroying everything good in Alexa's life, from the young student she tutors to the romance she thought she'd never find. Can Alexa win the battle for ratings and break through the glass ceiling, even if it destroys her—and everything she loves?

Sharp, witty, and heartwarming, Primetime Princess is an unforgettable sneak peek into the exclusive behind-the-scenes drama that occurs over the course of one TV development season.

WOW: Lindy, welcome to The Muffin. We're glad you're here and congratulations on the release of your debut novel! Exciting! After looking at your resume, all I can say is, 'WOW!' You've had a lot of great experiences working in the entertainment industry. Would you mind sharing how you got your start and how that experience translated into an executive position? Which project that you've worked on is your favorite? 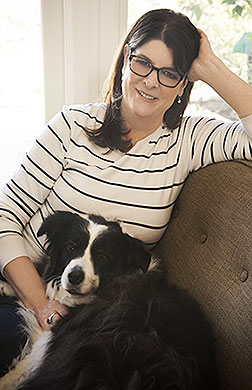 Lindy: I started as a temporary secretary for the CBS Sports remote crew. We were actually called 'secretary' then; most were women. That's literally how I got started. I thought I got the job because I was a good typist, but . . . I worked there for two or three years. I was on the second floor of CBS, on Fairfax and Beverly. The second floor wasn't the most glamorous. One day I had to make a delivery to the third floor, and when the elevator doors opened, it was like Nirvana—such a plush environment. Programming was housed on this floor and I was interested in programming. I made an appointment to see the president of CBS and he met with me. Instead of offering me a job, he asked me out on a date. Eventually I was a TV executive at Disney and Warner Brothers. I also was Executive Vice President of Movies and Miniseries for NBC Entertainment and NBC Productions, overseeing shows, including "Merlin," "Gulliver's Travels," "The Odyssey," and "A Woman of Independent Means." After that, I was Executive Producer of "Listen Up," a CBS sitcom, as well as several comedy and drama pilots at CBS/Paramount. [A bio including Lindy's work is available on her website.]

It's difficult to pick one, but I would say "Gulliver's Travels," which was completed when I was an executive at NBC. The network wasn't doing well. I was looking for a good project. The producer came in and pitched "Gulliver's Travels" as a miniseries. I had read it in high school and knew we could use special effects, which had not been done on TV before. It was blind faith and it worked. In TV in particular, I thought, maybe we can raise the bar a bit. It seems the audience is interested in learning as well as being entertained. I think those (NBC) miniseries worked because they were developed in an entertaining way. It wasn’t just spinach.

WOW: I didn't realize how difficult it would be for a woman to break into this branch of the entertainment industry. What are some challenges women working in film and TV face?

Lindy: It is hard to get in the door. Today, it is far more competitive than when I started. We're working in a global environment now. Women have to be more competitive and aggressive because the competition is so difficult these days. People come from all over to get jobs, at any  level, and some will offer to work for free.

WOW: I'm interested in how you transitioned from behind-the-camera direction to putting the words on a page. How did you discover your love of writing?  What are some of challenges you discovered about  the writing process?

Lindy: I had never written anything. After the NBC executive position, I became a producer for CBS on the sitcom, "Listen Up." It was cancelled. I wasn't sure what I wanted to do, so I took a number of classes through UCLA extension. I tried cooking, documentary film making, social media, anything, really. One class I took was woman’s fiction writing. I signed up not having any idea if I could write. I hadn’t written anything but emails. The first day of class, the instructor asked what my ideas were. I wasn't sure. She said chapter one is due next week. So, I got to work on it, and shortly after the class ended, I had a first draft. It was the only one writing class I took.

Those of us who are looking at second careers, you wonder, 'What do you do next?' When you're faced with that question, you know you want to do something, and you’re interested and active, but what do you do? The truth is, my field of expertise is story development, so what I’had done for 20 years was work with story ideas, pitching ideas. I was familiar with character development, character motivation, pacing—the plot elements—so that definitely helped me.

WOW: That's a motivational story! And once you were finished writing, you had an idea of who you wanted to represent your book. I'm sure our readers would be curious how you found your agent and why you chose Amazon Publishing instead of a traditional publishing house?

Lindy: Just because I had worked in the entertainment industry, most people think I called someone. I didn’t know any publishing agents. I did when I pitched movies of week, but I had lost contact. When the book was finished, I looked at a list of agents and did what the class instructor told us to do: find an agent that represented the book closest to yours. I think my book is like "The Devil Wears Prada at a TV Network," so I wanted that agent—Jane Gelfman. Her website says no submissions, so I thought, okay, how can I get to her personal email? I searched for personal email and couldn't find it. So I tried different variations until—believe it or not—she sent an email asking me to call her. I did and sent the manuscript. I was so bold, it was crazy. A few days later, she called and said she would represent my book. I think it was working in the trenches, working in the TV industry for 20 years, that gave me the chutzpah to do that.

Kelly Martin is editor at Amazon Publishing. I was intrigued. She gave such a great sales pitch. I was enthralled with her and what Amazon has to offer. It's the biggest website in world. Add its reach and the marketing aspect. Since I’m from a broadcast background, I understand that. It functions similar to broadcast TV, where many networks own their own shows. You watch what's picked up on schedules. So again, I brought my own experience to the process. It definitely was a motivating factor.

WOW: Again, your story proves that perseverance pays off! Lindy, many of our readers have full plates; they juggle family, a career, and writing. It's a tall, stressful order some days! How do you find balance with writing?

Lindy: I have a friend, a single mom who has published four books, and I've learned from her that you have to really want it. Every night, she would come home and write for an hour. I’m not saying I could do that. I don't have kids, but throughout my career, I was always doing something on the side and making time for it. You have to want it and schedule your day to allow for that. You have to be very motivated.

I remember women on staff at the network who were were doing their jobs and would still take work home. These are the choices you make in life. How much do you want? When is enough, enough? We seem to feel we have more choices than ever before, and I wonder if it (having choices) isn’t a burden? I'm not sure there’s a real good answer to it; some women seem to be more motivated and be superwoman and will go to all lengths to get to the goal.

WOW: Thank you, Lindy, for sharing your journey from the executive boardroom to a published author. Good luck with Primetime Princess, which is available at Amazon.com.