Why do you write?
To express yourself.
To explore an idea.
To create a character that interest you.
To explore a difficult topic like immigration, abortion, war, alcoholism.
To weave a spell.
To leave a legacy.
To explain your life to your grandchildren.
To explain how to do something.
To scare someone.
To make someone swoon.

The reasons we write are endless, they are personal. And each reason is valid. But if you want to cross over into the published world, you need one more reason: to sell. To think commercially is a problem for many writers.

For example, let’s say you want to write nonfiction books for kids. The National Science Teachers Association and the Children’s Book Council released their list of Outstanding Science Trade Books for 2013, about 58 books they deem literature that can be used in science classrooms, the best of science and the best of literature combined. I was lucky enough to have my picture book, Desert Baths, named to the list. 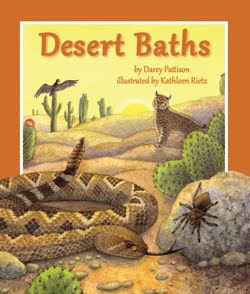 It has been interesting to study the list of about 58 books to see if there are common themes that make these books commercial. Overwhelmingly, the topics are about nature, especially animals. The second most popular genre was biographies, especially of scientists. Some combine the two, such as Wild Horse Scientists, from a series about contemporary scientists and their work. There were some technology books (about the bomb, the Mars rover, or other space topics), one chemistry book, one about the importance of oil, one on botany, and one about forensics.

In other words, there are big gaps in the scientific disciplines covered and there’s a possible window there for a topic, if it’s done well. On the other hand, nature/animals/biographies are proven best sellers, so it may be best to stick to those categories. Ultimately, the decision is up to you, but these are the sorts of things that you need to consider about when you think commercially.

Or, take for example, the popularity of The Hunger Games. Are dystopians still selling? Yes. But their popularity is probably waning a bit and by the time you write, sell and have published a dystopian, it may be the tail end of such books. Thinking commercial means going beyond just a description of a genre to the inner workings of the story to see why it worked. It’s a story of self-sacrifice, courage, facing unbeatable odds as an underdog—and finding a way to come out on top. Its themes are war, authoritarian governments, personal responsibility. The characters are realistic, engaging, sympathetic.

What if you keep those story elements, but recast them as you switch the genre to science fiction, fantasy, historical fiction or even a contemporary. Thinking commercially does NOT mean copying the latest fad. Rather, it’s working to connect with a wider audience. Is your book about an alcoholic step-mother? How can you connect that to a wider audience? What if the story plays off the Hansel and Gretel stories, the step-mother is the witch? Would that stretch out the scope of the story enough to bring in a wider audience? What if the President of the US is the father and his new bride is the step-mother?

Thinking commercially means finding niches in the marketplace that you can fill; it means reaching for a wider audience than your first attempts; it means lifting up your eyes from the keyboard and looking out at the reader to ask, "How can I tell a story that touches you on a deeper level?" That is thinking commercially.

Darcy Pattison blogs about how-to-write at Fiction Notes and blogs about education at CommonCoreStandards.com