It's Who You Know 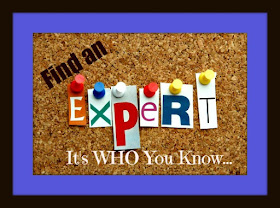 Writers, especially when beginning in the business, are told repeatedly to write "what you know." And while that adage has its perks, I've discovered that it's not always what I know, but WHO I know.

Think about it. More than likely, you have a lot of friends and those friends have friends. At work, you see colleagues daily. They undoubtedly have lives beyond the office, and I bet if you ponder for just a moment, you'll think about a work associate who would make a great feature subject. Plus, you have family, and somewhere in that cast of colorful characters, a story is waiting to take shape.

Think about the possible story ideas begging to be investigated!

I've made a fair amount of money penning feature stories for local, regional, and even national publications. And many of these stories featured people I know. For example,

And don't forget to count yourself as an expert. Need an example or two?

Think about the people you know, their hobbies, offbeat travel destinations, volunteer experiences.

By writing WHO you know, you'll have a plethora of story ideas.

And that means money in the bank.