Friday Speak Out!; Later Rather than Sooner, guest post by Rebecca Yount

When I was a callow teen, I had visions of swanning in the literary salons of as wealthy, middle-aged counts made fools of themselves over me.  Though impoverished, I was an intoxicating writer in the tradition of George Sand -- one who stirred men's hearts and incited women's envy.  In my visions, I was eventually rescued from my freezing garret by a bodice-ripping poet.  We married, grew wealthy from our popular books, and lived happily ever after, quaffing champagne and dancing in the Tuilerie gardens on warm summer nights.


Should we have children, we would see to it that their devoted nanny would be well paid.


Eventually reality bit, bringing me down to earth with a thud.  After I graduated from college, I was forced to admit that there were no attentive counts, middle-aged or otherwise, no bodice-ripping poet and, later on, no devoted nanny to assume the burdens of child-rearing.


On the plus side, I had been fortunate to go through college and graduate school on full scholarships. Predicated on my early training as a concert pianist, I continued as a music major, but a musician who wrote.  Though I love music, writing has always been like oxygen to me.


Following a failed first marriage to a fellow graduate student, I met David and his three school-aged daughters who lived with him.  When David and I married, I instantly became their "mom."  With a simple "I do," those fantasies faded from memory. Yet I loved being "mom," which I regarded as a special honorific title.


And I had something far better than fawning French counts: my husband, who is also a writer.  We vowed to make up for lost time later, rather than wallow in the empty nest syndrome.


David and I both enjoyed successful careers, but we still kept our eyes on the ultimate goal: to dedicate our retirement years to writing -- he religious non-fiction, me crime fiction.


But it wasn't easy.


Simply because your children no longer live under your roof does not mean you are totally free from parenting.  And ours seemed to require more than most.


There were times when one or more would move back home; other times when they refused to speak to us; times when they waxed sentimental about their upbringing; and golden instances when they showed signs of becoming strong, independent women -- which is where they are now. Face it: unless a couple can thrive on just one income, setting aside time for creative writing is nearly impossible while working full time, raising kids, fulfilling day-to-day family responsibilities, and cleaning up puppy doo.


I recall a music conservatory colleague once said to me:  "Becky, don't ever fall in love much less marry.  The grind of a marriage will be the death of your career.  Become the mistress of a wealthy man, and sleep with him whether or not you love him."


Yet even as I scrubbed pet mess from the carpet, I dismissed her advice as baloney.


The longer we live, the more we realize that life goes on.  I have not only raised a family, postponing my literary dreams, but I have endured to become an author while surviving open heart surgery.  It took me two years to become whole again, but by that time I had already written seven books in the Mick Chandra mystery series, eventually publishing the first one as an e-book.  Meanwhile, David is in the process of publishing his 15th book.  So, indeed, we have kept our literary vow to each other.


Recently we went out to lunch at our favorite neighborhood Italian restaurant.  As we entered, a strikingly handsome young man who works behind the counter flashed me his killer grin, and waved.


"Is he flirting with me?" I asked my husband.


"He always flirts with you," David answered.  "Haven't you noticed?"


"Doesn't he know I'm old enough to be his grandmother?"


Kids, if you happen to need us, your father and I will be dancing in the Tuilerie. 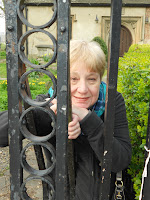 Rebecca Yount's debut crime novel, A Death in C Minor: A Mick Chandra Mystery, is available in e-book format from Amazon.com; Apple iBookstsore; Barnes & Noble; Sony Reader Store; Kobo; Copia; Baker and ; and eBook Pie. Her second Mick Chandra mystery, The Erlking, will be published in the fall. Her website is www.rebeccayount.com.