As someone who has been weighing the pros and cons of self-publishing lately, I embraced the opportunity to interview Dara M. Beevas via phone about her new book, The Indie Author Revolution: An Insider's Guide to Self-Publishing.

Dara M. Beevas is a writer, editor, blogger, speaker and indie author. She mentors other indie authors as vice president of Beaver's Pond Press, an award-winning mentoring publisher in the Twin Cities that has helped more than 600 indie authors self-publish. Her passion for authors and the indie author revolution led her to launch Wise, Ink, an online community for indie authors. She received her Master's Degree in publishing from George Washington University and was selected as an emerging writer by the Givens Foundation for African-American literature. In her spare time she writes poetry, short stories, and is a speaker on the topic of self-publishing. She's reachable via her blog www.wiseinkblog.com, LinkedIn, and @darairene on Twitter.

WOW: The Indie Author Revolution: An Insider's Guide to Self-Publishing is packed full of lots of advice and information. How did you come to write this book?

Dara: Well, in my day I work with authors. I've worked with authors most of my career, which is going on ten years, in this funny industry we call publishing. And, working with authors every day, I've picked up so much about their experiences. I learned so much about what goes into writing a book, what should go into writing a book, how to get it to market, and what goes into marketing a book. I basically started blogging, and the blog died after a while, but I had this idea, what if I put this information into a book from my unique perspective of working with authors. And so I culled those blogs that I wrote and put them into a very bad first draft and it kind of grew from there.

WOW: What sets The Indie Author Revolution apart from any of the other books on how to self-publishing? 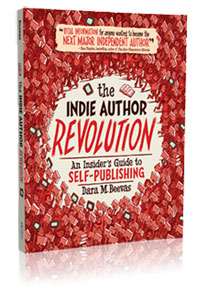 Dara: I think that the Indie Author Revolution is different because, number one, it was written and released at the right time. When self-publishing is no longer a disgraceful way to get your content into the marketplace, self-publishing is now an acceptable way to get good content out there. And so, it is a book written at the right time. But the content itself is different because I really want authors to think about their books as a business. I want authors to look at the publishing endeavor as a business function of their book, of their writing. And so, it's not just about writing a good story anymore. It's about writing a good story, then producing a good product from that good story and then marketing that product to the right audience that you have to research really well before you publish.

WOW: One of your suggestions in your book is to also make sure, if someone self-publishes, to hire good people to help with the book. Did you follow your own advice with The Indie Author Revolution?

Dara: I did. I followed my own advice to the "T." I hired four editors to work with me on this book. I not only had a designer design the book, I hired an illustrator to illustrate the artwork on the cover. So all those cool people that are lifting up their books and lifting up their iPads and Kindles, those were all hand drawn by an illustrator that I hired. I also hired a proofreader, I hired a professional indexer. I also hired a publicist. It really is, in my mind, a book that follows that old adage, "It takes a village to raise a child." A village raised this book. My name is on the byline, but several people helped me get it to the quality that it is.

WOW: One of the statements that I highlighted in your book is that "With self-publishing, you get what you put into it."

Dara: My nature is such and it is easier for me to take the easy way out on lots of things. After the first edit and after the second edit, I very much wanted to say, it's good enough. But I took the advice of those around me that said, "You know what, I really think you should do this." And "You know what, I think your introduction could use a little more finesse and punch and excitement." Or, "Do you mind if I make some notes?" And it happened again when I had a designer do some cover mockups. The designs she did, they were good, but not great. And another person said, "You should really get something custom made." Really, should I spend that money? Well, yeah, I should. It's going to have my name on it. And, I have to tell you, with all of the extra things I did, I feel so confident about this book. I am so proud of the work that others helped me put into it. Because of that, I have such a high sense of gratefulness and pride that every Indie author should have.

Dara: Oh, heck no. It's hard. It's frustrating. There are lots of lows. There are great highs. But there are definitely lows. It is not easy to publish, period. Whether you publish traditionally or publish your book yourself. Publishing, in and of itself, is hard. There are lots of things you don't know that you have to learn. Lots of terms you don't know that you have to learn. There's also a lot of vulnerability you are going to feel with putting your work out there. And then you're putting your work out there that you're doing and funding yourself. So it's doubly vulnerable. I think the beauty of getting a book deal is being able to hide behind a big imprint. But if you are the publisher, then you don't get to hide. It's by you, from you, marketed by you. And it's hard. Really hard.

WOW: What have you learned about indie publishing that you were surprised by?

Dara: I was surprised by how long it takes. I honestly thought, when I first started working on that first draft that it was going to be done in six months. Not kidding. I know what I want to say, I work with writers, I help writers, I help edit. I'm going to do this with no problem. And then I discovered that for a book to truly be publish-ready, it truly does take time. What I learned, in a sentence, as long as you think it will take, multiply that by ten. Or multiply that by two, at least. It takes a lot longer than you initially think it's going to take. But I also learned that it is a very enriching experience to have a book with your name on it that you worked really hard to bring to the market.

WOW: How long did it take you?

Dara: It took me two-and-a-half years.

Writers, if you are interested in learning how self-publishing works—from launching your idea and building your book to marketing your book—check out this comprehensive resource, The Indie Author Revolution: An Insider's Guide to Self-Publishing by Dara Beevas: www.indieauthorbook.com or Amazon.

Dara M. Beevas was asked her five questions by Elizabeth King Humphrey, who wanted to ask Dara about 50 more questions. Elizabeth is a writer and editor living in Wilmington, N.C.