Friday Speak Out!: The REAL Difference Between Men and Women, guest post by Sioux Roslawski


Men are from Mars. We all know it. Their scratching, their belching, their obsession with plasticized women—it proves they are indeed a strange species.


And women are always normal, well-grounded creatures. They never digress into emotional rants. They’re a wonderful mixture of the rational and the creative. (At least that’s my opinion, and I’m stickin’ to it.)


But where I see the biggest difference between men and women is in critique groups. The guys who have graced me with their suggestions and corrections are wonderful—don’t get me wrong. They’re generous with their gifts. Because of them, my writing occasionally sings rather than drags. I do appreciate their feedback. I do.


Too many times to call it a fluke, however, I’ve seen women in writing critique groups go above and beyond. On a regular basis, I've witnessed women not only point out a problematic part of a story or essay—they also take on that problem as their own. It becomes their mission…


I stink at titles, for example. I stress, and scan the lines, trying to find something in my writing piece that will bring a title to the surface. The women writers I work with will bounce ideas off each other, and will even email me later with possibilities. In the end, I’ve got a title that is almost always guaranteed to hook the reader.


Often, I fizzle out at the end. I run out of steam and passion before my piece runs out of space. In a critique session, the men might mention, “Your ending needs some work,” and leave it up to me. The women, however, will jot down some suggestions to strengthen it. We’ll discuss various ways to make it as fierce as the beginning.


And if it looks like I’m giving birth to “conjoined twins”—a problem that Tammy, one of my WWWPs (Wild Women Wielding Pens) says is a marvelous challenge—if it’s apparent that I have two-stories-in-one that need to be separated, the women will embrace my baby and recommend some directions I can take.


So you gentle gentlemen, who give me guidance in my writing: thank you. But the bulk of my gratitude has to go to the women I work with. During each session they take my story under their wings, they celebrate when I get a piece published, and they encourage when I get something rejected…and they do it with humor and grace and generosity.


Now ladies, how should I end this? I need help. Please? 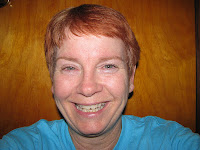 Sioux Roslawski is a third grade teacher and a freelance writer in St. Louis. In her spare time she blogs (http://siouxspage.blogspot.com/), rescues Golden Retrievers and dreams of someday retiring to southern France.