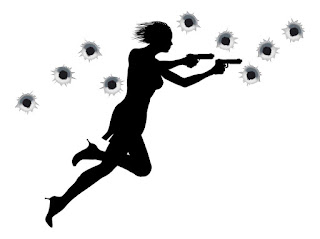 You need more than guns, knives and exploding objects to make an action scene work. When I started writing thrillers, I didn’t know that. The more bodies, the better, right? Those early attempts of mine didn’t sell, and I didn’t have a clue what they were missing. More action, perhaps?

Articles on the internet offered tips on pacing and other literary devices. Okay, I now knew the effects of different chemicals in the bloodstream. I understood how to kill someone with a nail gun to the head. This was about the time my husband started looking worried when I discussed potential weapons at the dinner table.

Only when I began understanding the elements of character-driven fiction was I able to write novels that sold. Don’t make the mistake of thinking a high body count will guarantee a compelling action scene. Remember The Silence of the Lambs? I don’t know about you, but I had to hide my eyes and cover up the words as if I were watching a movie. Yet how many people died in that story? One, and that murder starts the protagonist’s quest. Clarice wanted to save just one girl, stop just one more killing. When you think about that book, what do you remember? Clarice? Hannibal? These characters drive the story.

One of the biggest problems writers make in crafting action scenes is relying on what author Gary Provost called surface tension. This is secondary conflict that is caused by physical danger. Primary conflict is always person to person. Buildings might be blowing up, and bullets may be flying, but it’s the character who makes the scene compelling to the reader. Stay in his head, and if possible, have him interact with one other character. Think of Rue in The Hunger Games. Those scenes with Katniss would have been less without Rue in them. Their dialogue doesn’t detract from the action in the scene; it enhances it.

Another problem writers make is what I call researchitis. It’s fascinating to pore over details of murder and mayhem when you’re researching. Besides, doing so allows you to put off actually sitting down and writing your story.

You really don’t need to know that much to make a scene believable. Write the scene first, and research the kind of bullet in the gun later if you think you really need to.

Here are some other elements you can include to make the most of your action scenes:

An antagonist. A single antagonist is better than an army of them. You may have an army, but make one person the true antagonist in the scene.

Dialogue. It improves your pace.

Stakes. Why is your protagonist committed to the scene’s outcome? What is at stake for your character?

A ticking clock. Something is going to happen if your character doesn’t win this struggle—now.

Tight point-of-view. Your character is in the middle of an action scene. She is not going to be thinking of the action as a blow-by-blow police report. Record the action through her senses.

The best action scenes have true tension because of the characters and what they have at risk. Only then will the danger matter to the reader or the writer.

Now, where did I put that nail gun? 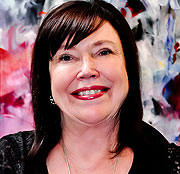 Author, teacher and public speaker Bonnie Hill worked as a newspaper editor for 22 years, a job that, along with her natural nosiness, increased her interest in contemporary culture. Her novel, Intern wascalled “a page-turner” by Publishers Weekly. Killer Body, a thriller about our weight-obsessed culture, was a Cosmopolitan magazine “pick.” She also wrote three newspaper thrillers featuring hearing-impaired reporter Geri LaRue for MIRA Books, the young adult Star Crossed series, and most recently, Ghost Island, a paranormal love story. Her publication credits include short stories, nonfiction books and articles.