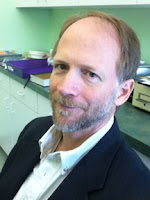 Congratulations to Michael Throne for placing in WOW’s Winter 2012 Flash Fiction Contest! Please enjoy Michael’s story, One Human Being to Another, and return here to meet this emerging writer!

Mike Throne lives in North Virginia with his wife and three daughters. After graduating from Goshen College, he spent twenty-five years developing what turned into a wind chime factory. Several years ago, he sold the business to begin working on his new passion, fiction writing.

Mike has been learning his new craft through courses at Northern Virginia Community College, George Mason University, and FaithWriters.com, a Christian-based online writers’ resource. As he continues to develop his skills as a writer, he will be seeking other opportunities to publish his work, and hopes to put out a collection of his short stories within the next year. When not writing, he enjoys camping with his family. Mike can be contacted at m.throne (at) verizon.net.

WOW: When did you first consider becoming a writer?

Michael: I had always wanted to write. When I sold my small business a few years ago, I had the time to try.

WOW: The subject of homelessness can be approached in many different ways. In One Human Being to Another you show not only our hesitation to trust the homeless but our hesitation to reach out for help. Why did you choose this particular slant?

Michael: I tried to make the situation as real as possible from both points of view. My goal was to bring out the nuances of thought that play into the actions of the characters: the protagonist's anxiety about her appearance, her attraction to Manny, the woman's initial concern in seeing people at her car, perhaps for her safety, but also for being asked for money, and finally, once safely in her car, her desire to possibly help. From the protagonist's point of view, her needs were so great that there was no way someone about to drive away could even start to fulfill them, and besides, she wanted to end with even a superficially sense of normalcy rather than feeling "homeless."

WOW: In stories of this kind the focus is usually on money or food. What caused you to decide on the hairbrush and what does that represent to you?

Michael: In Manny, the protagonist found a good person, someone she wanted to stay with. She liked his lack of compromise, even in their times of need. The hairbrush represented the MC's desire to simply look like a human being, a woman. She felt it was important, in particular, because of her desire to remain attractive in Manny's eyes, but by the end, simply to look "normal," in her own eyes as well as to the people around her. If you look homeless, you feel homeless; if you look "normal," you feel normal.

WOW: You’ve been working on a collection of short stories; in comparison, how was your experience with this flash fiction piece?

Michael: I loved this one. Of course, I love them all, at first. It's the ones that still speak to me after I've worked on them ten or fifteen hours that I keep.

WOW: Many writers find themselves writing on a theme while others explore a wide range of subjects and expressions—what about you?

Michael: I try to write about things I know, or think I do, anyway. The themes vary, but I hit a dry spell when I have nothing interesting left to say. Coincidently, I was just in Philadelphia working with an organization that helps the homeless. I've been giving the subject more thought lately and may try to expand on the theme.

WOW: What are your long term goals as a writer? Is there a novel in your future…or a screenplay?

Michael: Hopefully, I have a novel to write.

WOW: We wish you all the best and look forward to reading your short story collection!