Does a Freelance Writer Need a Resume? 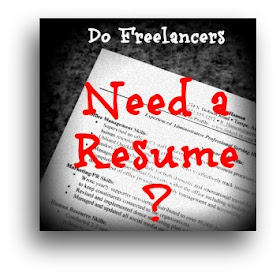 Recently, an editor encouraged me to apply for a freelance position opening within his organization.

My initial thought was Well, if you are encouraging me, then why don't you just hire me? :) (It's a large conglomerate of publications and websites, so I have to follow protocol.)

I received a list of required application pieces: a cover letter, writing samples, and a resume.

I opened my Word document to peruse my resume and make any necessary tweaks. But what should I include? Do I list my last ten years of work experience? Do I list only writing-related jobs? Should I submit only publication list?

It's a bit of a conundrum.

Here's what I came up with: a targeted skills resume and publication list.

First, I revamped my resume so it featured writing, blogging, and editing jobs. I've been lucky; I haven't had any lapses in my freelance work. Even if I had, I would have been able to include teaching positions since I instruct several writing, English and Journalism classes.

A skills resume let's me highlight my qualifications in multiple categories:

Under the education section, I listed my B.A. and M.A. concentrations, as well as writing workshops and class I've participated in.

While many publishers and editors won't require a resume, it never hurts to have one that focuses on your credentials prepared.

You never know when you'll be encouraged to apply for a position.