The Emotion Thesaurus – Review and Giveaway 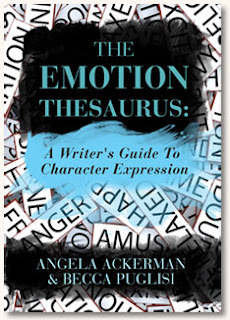 As I rewrote chapter 1 of my novel, all seemed well. My character’s voice comes through strong and I’d built up the tension. But as I worked through following chapters, I found trouble.

Every time he got in a tight situation, my main character chewed on his lip. Every. Time. When he was frustrated, he’d heave a great sigh. By the climax, he’d be lighted-headed and lipless unless I did something about it.

Fortunately, writing partners Angela Ackerman and Becca Puglisi have created the The Emotion Thesaurus: A Writer's Guide to Character Expression for times just like this. The listing of 75 emotions ranges from adoration and anxiety to somberness and terror.

Before reviewing it, I decided to test the thesaurus. I’d rewrite one chapter to make sure my emotional details were varied but accurate at the same time.

The first emotion that I looked up was Excitement. Each entry includes a definition of the emotion (the state of being energized or stimulated and provoked to act). That sounded right but my character was standing like a lump waiting for someone to catch up. The listing included almost a full page of physical responses. Soon I had my character fidgeting as he waited—a response that fit his personality and was more accurate than what I had previously written.

Because this part of the story was moving at a fast pace, I didn’t include internal sensations or emotional responses, but those are part of the listing as well. If my character was trying to look bored instead of excited, I might have focused on an internal response or the choices for suppressed emotion.

Then I saw the Writer’s Tip and laughed. “If you’re stuck on how to show an emotion, form a strong image of the scene in your mind. Let the scene unfold, and watch the character to see how they move and behave.”

If I’d done that, I wouldn’t have needed a cue to remind me that my character, a nine-year-old who vibrates with energy, wouldn’t stand still while he was waiting.

That’s exactly what makes this book a perfect reference. Scan through the various responses and you will find something that makes you think “Of course, that is exactly how my character would act.”

Can’t find the emotion you need to describe? Try again. At one point I tried to look up Enthusiasm which isn’t listed. Why not call it Excitement which is just as accurate? It isn’t my names for the emotions that need to be varied, but my character’s reactions.

Get a copy of this reference in time to rewrite your next fiction project. Your character may be able to release her clenched jaw and simply thrust the paperwork at someone in frustration instead. She’ll be reacting in a greater variety of ways and you’ll have some hints for how to make her emotions more obvious.


GIVEAWAY: THE EMOTION THESAURUS: A WRITER'S GUIDE TO CHARACTER EXPRESSION

We also have a giveaway from the authors, Angela Ackerman and Becca Puglisi! And after that fabulous review, I'm sure you'll want to win a copy for your writer's reference library. Just enter the Rafflecopter form below for a chance to win a paperback copy of The Emotion Thesaurus: A Writer's Guide to Character Expression (ARV $14.99), or a e-copy—reader's choice! The contest is open to US and Canada. If you have problems using Rafflecopter, be sure you are running the latest version of your web browser and have javascript updated.