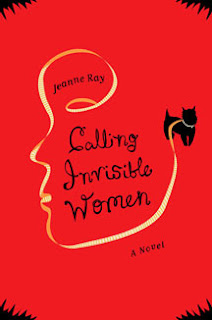 Jeanne Ray's been around long enough that Calling Invisible Women: A Novel might seem slightly autobiographical. Ray wrote her first novel at sixty-years-old and there is no stopping her now. Calling Invisible Women is Ray's fifth, after Julie and Romeo Get Lucky, Eat Cake, Step-Ball-Change, and her New York Times bestselling work Julie and Romeo.

Just like Ray, Clover Hobart is not willing to let a little bit of age—or, in Clover's case age and invisibility—get in her way to become a source of inspiration to those around her. Well, at first Clover is a little hesitant about her invisibility, but who wouldn't be? She's a fifty-ish mother of two who has been feeling a little invisible since she stopped being a reporter (she's downgraded now and simply writes the newspaper's gardening column) to take care of her family.

Besides the gardening column and figuring out how to re-use poinsettias, her unemployed son, Nick, has returned to the family nest and her doctor husband, Arthur, has a busy practice. This pair keeps Clover seemingly in domestic handcuffs. While Evie, her overly dramatic daughter, is busy at college until heartbreak hits and she, too, heads home.

Clover's story seems like an imperfect, everyday suburban tale. It's nothing out of the ordinary. Imperfect and ordinary, until Clover wakes up one morning and can't see herself. But Nick and Arthur don't seem to notice. For. Weeks. Gilda, Clover's next-door neighbor and best friend, and her mother-in-law notice, but then they always notice everything, don't they?

Clover can keep filing her newspaper column and keep the family running, even as an invisible person. Then, one day she notices a want ad "Calling Invisible Women" and Clover knows that she is not alone. And, although it is tricky to find another invisible woman, Clover manages to find them and Clover starts to learn how she ended up invisible. But they also teach Clover a more important lesson: how to live as an invisible woman. In turn, Clover's ability to deal with her invisibility helps to drive her to become more visible, in subtle (and not-so-subtle) ways.

Ray does a believable job of showing Clover among others—those who can see her and those who can't. As Clover becomes more comfortable in her invisible skin, she can take on all kinds of jobs and chores—even snooping on husbands or kids who might be up to no good.

Clover starts connecting and learning from the group of invisible women, which gives them all the support mechanism they need to re-enter society as teachers and nurses and reporters. Clover is challenged in many ways she never thought possible and along the way, she becomes a source of inspiration, albeit invisible.

We also have a giveaway from the publisher! Just enter the Rafflecopter form below for a chance to win a hard-cover print copy of Calling Invisible Women: A Novel (list price: $24). If you have problems using Rafflecopter, be sure you are running the latest version of your web browser and have javascript updated. Please also leave a comment!