It starts early. We, as women, are taught to “hide our light” under a bushel. Socialized to believe that “ladies” don’t brag, and men don’t like smart women, we clam up and “dummy down” as the situation dictates.

So sometimes we don’t share our big dreams of becoming a best-selling novelist, or our boast-worthy accomplishments along the way. But, for those of us who are called to pen words for a living, this dynamic produces more “internal conflict” than any of the characters we write about.

It starts early. I remember back in grammar school as a “gifted student” I didn’t dare raise my hand too often in class, (studious, I knew many of the right answers), but feared standing out and potentially inviting ridicule from peers. But, sanctioned silence often has its price.

Fast forward, it’s the year of 2006. I had been a writer for about a decade, and at the recommendation of a long-time publisher, I decided to write a book.

According to her, my natural writing ability, coupled with the popularity of my monthly relationship column for her magazine, was sure to make me a big hit as a self-help author. So, I worked feverishly, to produce the perfect pitch letter, and ultimately sent it out to several agents, with the expectation of an Oprah show appearance in my near future.

Long story short, a New York agent, who had originally expressed high interest, wrote back with the following:

“You have obvious talent as a writer, but not a strong enough platform.” Ouch. It hit me like a ton of bricks. Had all my hard work been in vain?

As unfair as it seemed, I’ve been on a mission ever since, to shout off the rooftops, wag my own tail, toot my own horn, have the “moves like Jagger,” and whatever else I need to do, not just to build a platform, but to build connections and a career that stands the test of time.

I call it the “Green Light Project”.

I’m giving myself permission to be awesome and to celebrate those who are on the same journey. Maybe you’ve heard of me. If you haven’t, you will. Helen Reddy said it best decades ago, “I am woman, hear me roar!” 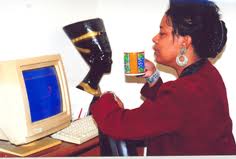 Jennifer Brown Banks is a veteran freelance writer, Pro Blogger, ghost writer, and relationship columnist. Her work has appeared at sites such as: PRO BLOGGER, MEN WITH PENS, FUNDS FOR WRITERS, WRITE TO DONE, DAILY BLOG TIPS, and a host of other influential, award-winning sites.

Her Blog, Penandprosper.blogspot.com/ was selected as a finalist at Write to Done's Top 10 Blogs for Writers for 2011/2012.