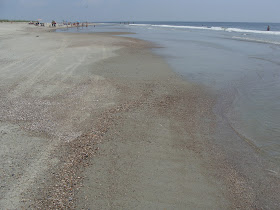 I’m at the beach this week and taking a little time to work on plotting. I’ve been wondering about trouble, as in how to make trouble for my protagonist, and then I remembered a fish story.

Many years ago, I was sitting in a lounge chair on the beach, when a boy, fishing in the ocean, pulled on his line and started yelling.

And so his friends came running, and the boy heaved and heaved, and the line bowed and bowed. A crowd started to gather, watching this boy trying to pull in whatever was on the other end of that line.

The line began to drag the boy down the beach. He splashed through the water, running parallel to the shoreline, block after block, always pulling on the line. He looked like the Pied Piper of Hamelin in surfer shorts, with little kids and big kids, moms and dads, old-timers and me, too, following behind him, shouting and asking, “What is it? What could it be?”

Until finally, we saw it, skimming the top of the shallow water—a stingray’s wingspan—and it was huge! The gray behemoth’s barbed tail flashed, and then suddenly, it flicked those wings and with a snap, the line broke. The boy fell on the sand, exhausted.

That was some kind of high drama, and I’ve never forgotten it. And working now on my plot, I’m reminded that if I want good drama, I need bad troubles.

Every story has a protagonist that wants something. The boy on the beach, for example, wanted to bring in the fish on the other end of that line. Lots of kids and adults were fishing at the water’s edge that day, wanting the same thing. But I’ve remembered that particular boy for one reason: he had a whole lot of trouble reaching his goal.

He slipped and slid down that beach, playing out his line, matching wits with the unknown. He hollered to his friends for help. The strain on his face, the tension in his biceps, was visible testament to his refusal to give up! He was absolutely compelling in his quest, and that made his story compelling.

So don’t make it easy for your protagonist to reach his or her goal. Make that protagonist work! Throw in obstacles, ramp up the troubles!

I guarantee you’ll land one whopper of a story.
Cathy C. Hall at 4:00 AM
Share