The Power Of Curiosity 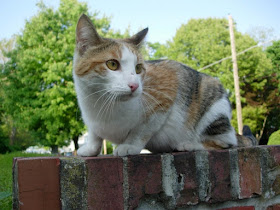 Sure, I know the claim, that curiosity killed the cat. But I’m not buying it. I think curiosity made the kitty just a little bit wiser.

Curiosity is what propels cats and humans to find out more, and if you’re a writer, finding out more means answering the who, what, how and why questions that can jumpstart your writing. Just take a closer look at the world around you and I promise you’ll find a great idea worth writing about.

Don’t believe it’s that easy? I know something, right under our noses. Let’s pounce on today’s date, February 6th.

Did you know that February 6th is the feast day of Amand? Or Ronald Reagan Day in California? It also happens to be Waitangi Day, celebrating the founding of New Zealand, as well as Sami National Day.

Now, you probably recognize the name of Ronald Reagan. But aren’t you curious about who the heck Amand was, or what Waitangi had to do with the founding of New Zealand. And seriously, Sami? What’s a Sami?

Why not play around with one of those ideas? Amand is one of the great saints of Flanders and the patron saint of beer (Aren’t you wondering HOW he ended up as the patron saint of beer?). Check out Waitangi Day and you’ll find that this national holiday has seen quite a bit of protest (Now WHY would this celebration be so politically charged?). And the Sami? (That’s a member of an indigenous nation of the Nordic peoples. WHO knew? I mean, besides the Nordic peoples.).

Curiosity can be a writer’s best friend. So the next time you’re struggling with writer’s block, pull a couple questions out and let the power of curiosity open your mind’s door to the stories right in front of you.

You’ll be so much wiser, just like the cat. (But you’ll be the one holding an acceptance from a very satisfied editor!)