All I Ever Needed to Know About Personal Essays... 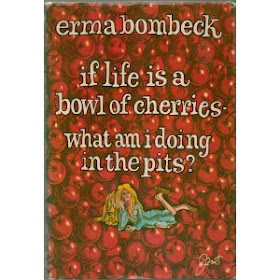 ...I learned from Erma Bombeck.
When I was about twelve years old, one book on my Nana's shelf always intrigued me. Red cherries splashed across the cover and the title was If Life Is a Bowl of Cherries, What Am I Doing in the Pits? Huh? Finally, she offered to lend me the book. That was my introduction to Erma Bombeck. Erma wasn't like any of the moms I knew: she was grumpy and funny and occasionally wore her pjs in public.
About a decade later I still had Nana's old Erma Bombeck book, one new baby, and no career. Then the bat got into the house. After rendering our house bat-less, with the help of a crabbing net and one maniacal cat, the story poured out of my pen. I sent it off to Central Penn Parent without much optimism. After all, I only spent 20 short minutes writing it. Perhaps that's fitting since it only took them two short weeks to buy it.
That sale began my life of writing essays and Erma taught me quite a few things:
1. You might think you lead a boring life, devoid of adventure, unworthy of being captured in ink. But millions of people are leading that same life and would recognize themselves in your slice of life essay.
2. A story about "the funny thing that happened today" isn't an essay. Essays have hidden meanings. After they read it people have to think, "that was really about..." You're the writer. It's your responsibility to make the connections between real life and deeper meanings.
3. It's harder to make people laugh than to make them cry. And they'd rather laugh.
4. Dialogue is invaluable to an essay. Nothing can get your point across like a quote from a four year old.
5. Kids see through all the politeness of life to what's really going on. And they are infamous for coming right out with the truth everyone is thinking. It's OK to steal ideas from your kids. After all your writing is keeping them supplied with ice cream and juice boxes.
Erma Bombeck recorded the foibles of her life for 30 years in her syndicated column At Wit's End and several bestselling books before her death in 1996. But her spirit lives on in the Erma Bombeck Writing Contest. If you have any humorous or human interest pieces of 450 words or less you still have time to enter. The deadline is tomorrow! You can learn more about the contest here.
Jodi Webb's essays have been published in national magazines and books. Recently she even recorded one for National Public Radio. She will be teaching "Let Me Tell You a Story: Personal Essays for Beginners", a WOW class beginning on March 20. When she isn't writing essays, Jodi writes magazine articles, organizes WOW Blog Tours, and shares her favorite authors at Words by Webb.
Jodi Webb at 1:48 AM
Share