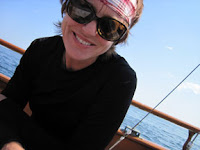 Hey dude, do you remember being twelve? Liz does, and she takes us back to that awkward time in her story “Smoke Rings.” In this flash-fiction piece our two main characters share an unspoken understanding; but like any true story teller, Liz just couldn’t leave the story. After you read Liz’s flash-fiction entry, skip on over to her blog site to read the “novel excerpt” version. Then, come on back for an interview with Liz Tucker, writer and poet.

Liz is a graduate of the San Francisco State University Creative Writing program. Her short stories can be found in Transfer Magazine and soon in Tahoe Blues, an anthology to be published by Bona Fide Books at the end of 2011. Her poetry can be found in Red River Review and soon in the 2011 issue of The Aroostook Review. Liz is a sixth-generation Californian who lives in the Sierra Nevada Mountains near Lake Tahoe where much of her writing takes place. When she is not writing, she can be found anywhere outside with her husband and two children or hacking away at the cello when the weather isn’t cooperating. To read more of her works please visit Liz at her blog, http://liztucker.wordpress.com/
WOW: Hello Liz, congratulations on placing in the WOW! Spring 2011 Flash Fiction Contest! I have to say, I skipped on over to your site and lost all sense of time. You have quite an impressive selection of offerings there; your love for fiction is obvious. When did you first begin writing?

Liz: It was in 2002; one of those rare epiphany moments that we get to experience in our lives and then actually seize upon. One spring day over breakfast I decided that after briefly dabbling in the art form, fiction writing was going to be my gig. Trouble was, I had only a faint idea of how to craft a proper story. Instead of playing around with the writing process, I knew I needed a solid foundation in the craft. I needed discipline. So by that afternoon I submitted my application to San Francisco State University’s Creative Writing department and started writing in earnest that summer. I have been writing ever since, but many days still feel I have only the faintest notion of how it’s done.

WOW: You write both poetry and fiction; share with us a little about your relationship to both forms.

Liz: I consider myself primarily a fiction writer, but I am particularly interested in the intersection of poetry and fiction; how powerful language, imagery, symbolism, voice, themes, etc...is used to propel a story forward. Perhaps I will get lambasted by more established, professional poets, but I believe the two forms essentially strive for the same outcome--to evoke fresh, powerful emotions in our readers; to make our readers think.

Whether you are talking about poetry, flash fiction, short stories, novellas, novels, they all lay on the same continuum of story telling. Poems, in my mind, are the tightest of these forms. Each word, each image must count. There cannot be any excess. We fiction writers, however, are given more opportunity as we move up the story-telling chain and while there may be more leniency in the breadth of language in novels than say poetry, we must be mindful of using concise language and potent, evocative imagery.

WOW: What type of fiction do you feel most suits you and why?

Liz: I do enjoy the bizarre, fantastic aspects of magic realism. It is not for everyone, but it is a great ride whether you are reading it or writing it. Once you suspend your disbelief--once you let go-- you are free to experience something very strange, compelling and unique. It still boils down to the human condition, but characters can go so many more places and do quite fantastic things, while still keeping their feet grounded in the “real world.” Fantasy is not for me, but this distant cousin, is both exciting and bizarre.

But at the heart of it all I really value fiction that is not afraid to expose the harsher world we live in. I did not cut my teeth in the era of Doris Day, so, I am not much for perky stories with cheerful endings set in overly idyllic settings. Life isn’t always nice--yes it is filled many, many exceptional joys, but life is also filled with warts and wrinkles, hardships and horrific experiences. I cut my teeth during the Vietnam War and the Watergate era, so I suspect I am more comfortable in exposing the grittier, perhaps crueler side of life--issues that perhaps might otherwise be swept under the proverbial carpet.

WOW: What author has most inspired you and how?

Liz: Gabriel Garcia Marquez for his magic realism. He is a master. Lorrie Moore for her acerbic wit and because she is unafraid to unearth the poignant, tough subjects; Junot Diaz for his humor, voice and acrobatic prose, and Michael Ondaatje for his poetic use of language in fiction.

WOW: Tell us about the inspiration for "Smoke Rings."

Liz: A friend of mine once told me about how her boyfriend’s father was running alongside a train in order to interview a politician who was arriving at the train station. A metal bar happened to be sticking out of a train window and clocked him in the head and rendered him an invalid, much like the Mr. Guzman character. After that he just sat bandaged up in his house, while the neighborhood kids fed him smokes. It sounded horrific, but terribly intriguing, so years later when I sat down to write Smoke Rings, I called my friend to gather more info, she said, “I have no idea what you are talking about, Forrest’s dad worked for Pacific Bell. That never happened to him.” So honestly I don’t know where I came up with this. Perhaps I dreamt it, perhaps somebody else told me the story, but it was too good to pass up. So I just took the idea, started writing, continually mining deeper and deeper into the psychological effect that dreadful human condition would have on all characters in the story.

WOW: What is your writing ritual? Do you have a favorite music, beverage, time of day, etc… to get you rolling?

Liz: Mostly I write in the mornings with a French press by my side. Generally, I write for an hour or two, go out back with my axe and chop wood, or ski or what-have-you, write for another hour, play cello, write, and then call it quits when I pick up my kids from school. It is amazing though what the simple act of chopping wood does to clear the mind when you feel mentally fatigued in the writing process. Perhaps it’s the adrenaline, perhaps it’s the simplicity of the task, perhaps its the seemingly mindless focus on a block of wood and an axe, but hard, physical labor helps me focus on my characters or iron out sticking points in plot in ways that skiing or climbing or surfing or playing with my kids or hacking away on the cello can never do.

WOW: What made you decide to enter the WOW! Flash Fiction Contest?

Liz: A friend of mine sent me the link and I thought why not? I am hooked, so I just entered another story for the Summer 2011 contest.

WOW: That’s great; I can hardly wait to read it! What are you working on now?
Liz: I have taken the Smoke Rings flash fiction piece and turned it into a novel. Then I took the novel and broke it down into a 5000-word short story, taking the meatiest parts, the heart of the story if you will, and began evaluating the story arc in the shortened form. Some days, I think the novel is better; there is so much more to uncover. But many days I fear the short story is the proper form and that I might be wasting my time with the novel. It has been a fantastic experience to build it up and break it down into its various forms. I am still committed to the novel and currently working on the third draft. It is sort of a modernized To Kill a Mockingbird meets Stand by Me. I have exchanged the tomboy narrator in the flash piece for an adolescent boy living in Modesto, California in the late 1970s. Time will tell if I can pull it off, but I hope to have it more or less ready for submission in the not too distant future.

WOW: Something tells me that buy the time you get done it will work well in all three forms. Thank you, Liz, for a delightful interview!