Several years ago I had the first draft of my first manuscript and was invited to a reading at a literary agent’s home by a friend. I was a little nervous about going because I wasn’t quite ready to share the manuscript but the reading was amazing. It was a first time novelist and she read and then took questions at the end. Someone asked about the writing process and she confided that just before publication her publisher asked for major rewrites and additions and she was—of course—on a very tight schedule. She said her way of dealing with the pressure was to go to a secluded spot with only her computer and some Shakespeare.

When she felt completely stumped she said she’d read Shakespeare until she fell asleep and then, without fail, when she awoke she was able to continue down a line or begin a new one.

When I first started training as a creative writer I was heavily influenced by the texts I read: Joan Didion and James Frey in particular. My own writing would take on their cadence, the beat of their voice. Because of this I wrote for a long time without being able to read during the creation of text. I wrote my memoir, Lost Edens, without any books at my side. Now, though, I’ve started to embrace what I heard that author say recently: if you don’t have enough time to read then you don’t have enough time to write. I read voraciously in a wide variety of genres. If I’m overly concerned that I might be susceptible to another writer’s rhythm like I was early on, then I read a romance novel or academic articles. The trick is just to read (something, anything!). Understanding the craft of writing and understanding what is possible can only be done if you’re immersed in the outcome.

I read that Stephenie Meyer had a soundtrack of sorts that got her through the creation of the Twilight series. The music helped to inspire her. I think my next book will definitely have not a soundtrack, but a shelf of books that got me through the bumps in the road. 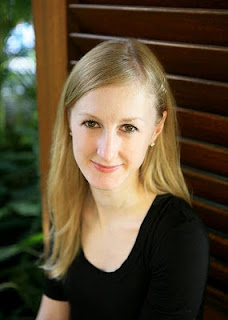 Jamie Patterson is a 33 year old writer, teacher, runner, and dog owner who spent most of her twenties trying to please everyone she encountered and help everyone she met. She has a Master’s degree in Language and Literature. A former spokesperson for the American Red Cross and the Girl Scouts, Jamie is now a frequent flier based in Minneapolis, and an academic editor with Walden University. Lost Edens is her first book.
Visit and Blog with Jamie and and join her fans on Facebook.
~~~~~~~~~~~~~~~~~~~~~~~~~~~~~~~~~~~~~~~~~~~~