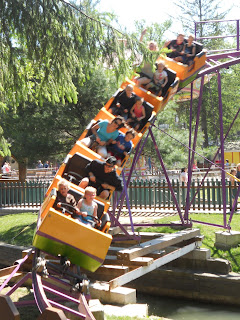 Like most people, my days have a tiring sense of sameness. I get up at 6:30 am, make lunches, yell for kids to get dressed and get on the bus, fire up the computer at 7:30 am, emails, queries, drafting, editing, blogging until the kids show up at 2:35 pm, homework, signing endless school permission forms, laundry, supper, reading, maybe a bit of TV, bed. And around it goes.
I like my life but it is not exactly a roller coaster ride. Who's life is? The difference between me and everyone else is I'm attempting to create characters that people like (or hate) so much they want to read their stories. Emotions, quirky habits, humor...can you get all the ideas you need to create that from a weekly trip to the grocery store and daily discussions with the dogs (my writing partners)?
So this summer I began "collecting experiences." It all began with the car accident. It was a one car, nobody hurt accident. But it was definitely something I had never experienced before. Although I am not normally a journaler, that night I wrote about the accident. Not a short story or essay but more of a record of my emotions, impressions, and memories. Just so I wouldn't forget in case I ever wanted to use it. BTW, two of my characters were recently in a car accident. Coincidence?
Now, I'm not encouraging anyone to smash up their car (insurance agents worldwide are heaving a sigh of relief) but that was the beginning of my attempts to collect experiences. Next week I'm recording one of my essays to be played on NPR. I've never worked in radio or performed in any venue...probably since the fifth grade Christmas program! I kayaked. I rode a roller coaster in the dark (I rarely get on them in daylight!). I have definitely not enjoyed all my out of the box experiences. But I've recorded all these experiences in case my characters ever need them.
I don't use every experience moment for moment. The exhaustion after kayaking became a character's reaction to her first practice for the cross country team. The people waiting in line for a roller coaster became a groom and his best man before the wedding. The slo-mo feeling of the car crash became a woman hearing her son was killed. Here are some of the questions I record the answers to:
Forget about losing ten pounds or putting all the family photos in albums. This year I think every writer's new year's resolution should be to collect new experiences.