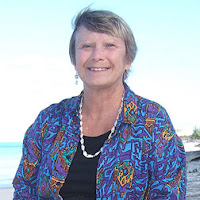 Jody Rathgeb has been a journalist and freelance magazine writer for many years, but she was inspired to start writing fiction when she lived for four years in the Turks and Caicos Islands. Her short stories have been in The Battered Suitcase, Ink-Filled Page and Tongues of the Ocean, and her novel, Fish-Eye Lens, is due from Belle Isle Books this fall. She now divides her time between Richmond, Va., and North Caicos Island. Her weekly blog and information about the novel and stories can be found at www.jodyrathgeb.com.

WOW: Congratulations on placing in the top ten in our Spring 2011 competition! What inspired you to enter the contest?

Jody: Whenever I finish a story, either flash or longer, I begin looking for a proper “home” for it. The character’s dilemma in “Slave Hands,” plus its flash form, seemed to make it a match for WOW.

WOW: Can you tell us what encouraged the idea behind your story?

Jody: All of my stories deal in some way with the islands and their people, and one issue that’s been rattling around in my head is the ambivalent relationship today’s islanders have with their history of slavery. I wanted to show that people can in some way “own” the past, even if they were slaves. Joseph, who is on the verge of adult thinking, seemed a fitting character for that.

WOW: It's an excellent story. After living for four years in the Turks and Caicos Islands, you now divide your time between Richmond, Virginia and North Caicos Island. What led to this living arrangement, and can you describe the Caicos Islands for those of us who haven’t been there?

Jody: Quite frankly, it’s because my husband flunked retirement! We were doing a two-phase move to the islands, with me as the advance guard … but after Tom arrived he decided that he missed his work. When his former boss indicated that he would like to see Tom return, I knew that’s what he wanted to do. Living apart no longer made sense, so I came back to the U.S. But we still have a home on North Caicos, and I spend chunks of time there several times a year.

The Turks and Caicos Islands have spent the last 15 or so years emerging as a tourist destination, but the results have been ragged. Some islands, especially Providenciales, are deep into the “tropical paradise” marketing game, but other places such as North Caicos are quieter, less developed and more connected to cultural traditions and the old ways. Think of the Bahamas in the 1950s. This makes it an interesting place, poised between the past and future.

WOW: It sounds like a fascinating place to live. Your novel, Fish-Eye Lens, is coming out this fall. You must be very excited! What has your novel writing journey been like?

Jody: Fish-Eye Lens is the result of wishful thinking plus plenty of time and quiet. While living alone on North Caicos, I was enjoying island gossip and all the types of people who live in such a place, but I didn’t like the ways some outsiders were trying to develop the island. So I put it all together and came up with a what-if story in which the boozy expatriates join with the church ladies to oust a sleazy developer. Working on the book each day after doing heavy physical chores such as weeding, shoveling gravel or painting gave me something to look forward to and helped give structure to my days.

I had fun writing it and even enjoyed the editing/rewrite process. The frustrating part was trying to “sell” it to an agent. Fortunately, the publishing business was beginning to change. Self-publishing was too daunting for me, but I managed to find a hybrid in Belle Isle Books, which is an imprint of Brandylane Publishers.

I know the journey isn’t over; there’s still all that marketing stuff ahead. But I think my ambitions are modest. I just want Fish-Eye Lens to find its audience … a group I’ve described as “Parrot Heads and other escapist boomers.”

WOW: What do you enjoy about flash fiction writing versus the other kinds of writing that you do?

Jody: I like the focus of flash fiction. A story is just one thing: one emotion, one event, one change. Because of my journalism background I’m used to tight writing, but in flash fiction the tightness is teamed with intensity.

WOW: Thanks so much for chatting with us today Jody! Before you go, do you have any tips for our readers who may be thinking about entering writing contests?

Jody: I’m just figuring this stuff out myself, so I don’t think I can give any advice! The only thing I can say is that you can’t win a contest you don’t enter. Just do it.