Pull Out Your Pens, it’s Time for a Writing Contest!
Quote Contest: "Roryisms" - Show Stopping Statements from the Viewpoint of Rory Falcon

What is a "Roryism"? Amy Lewis Faircloth, co-author of Wicked Good explains:

A "Roryism" is a statement which makes the conversation stop because it is so unexpected. Joanne, at age 6, might have invented the Roryism when she announced that she wanted to be a bus driver. My son, however, has perfected the Roryism. For example, while at the Bangor International Airport, we watched as army soldiers debarked from a flight from Mississippi and waited for their flight to Afghanistan. Because there were so many soldiers, my son remarked that they must have come in on several planes. When told that they had all been on one plane, he exclaimed, “they flew in the freakin’ Titanic”; a conversation stopper, and funny.

For this contest, a Roryism must sound as if it comes from the viewpoint of Rory Falcon, a very special character in the novel Wicked Good.

Prize: $100 Prepaid Credit Card and winning quote will be published in Wicked Wise, book two in the Wicked series.

Winner Announcement: One lucky winner will be announced Wednesday, December 7, 2011 on The Muffin in a post highlighting The Top 10 Roryisms. 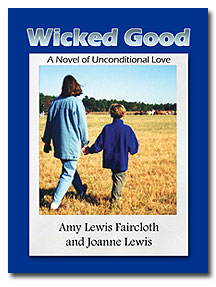 Rules & Regs: Open to anyone who purchases a copy of Wicked Good either as an e-book or print copy. Book may be purchased at www.amyandjoanne.com. Wicked Good is also available for purchase in both print and e-book formats at Amazon and at Barnes & Noble.
- You may enter as many times as you wish. Roryisms may be of any length and must be told in the character of Rory Falcon.
- Please include WOW! RORYISM CONTEST in the subject line. Please include your name and email address in your submission so we may contact you if you win. Upon submission you will receive an auto-response that your submission has been received.
- Entries must be received no later that midnight pacific time on November 29th, 2011.
- Winner will receive a $100 prepaid credit card. Winning entry will be published in the upcoming book Wicked Wise.

How to submit: Please submit your quote entries to wickedgoodcontest@wow-womenonwriting.com with WOW! RORYISM CONTEST in the subject line.