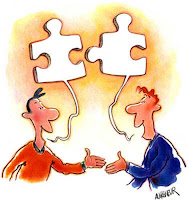 I love dialogue. Whether I'm writing it or reading it I find it truly helps to make a good story great. Among other things, good dialogue connects the characters; allows a reader to 'see' more deeply into each character's personality through what they say, how they say it and to whom; helps a story flow more smoothly (imagine how tortuous it would be reading a story with only descriptions and back story. ::yawn::); and makes the reader feel as though she's right there in the story.

As with other aspects of writing, constructing good dialogue is a skill that takes some practice to nail down well. Like all of you, writing dialogue scenes is something I'm still learning to perfect. I thought we could have a discussion today on how to make a our dialogue flow. Here are my five tips to writing these important scenes:

1) Act naturally. This has to be the number one thing to remember about writing effective dialogue. As an editor, I've read some potentially good scenes that read more like court transcripts. To draw a reader into your story, you have to make sure that your characters are speaking how people...well...actually speak to each other. Pay close attention to how you speak to people and how others speak to you. That's a good start.

2) Different speech for different folks. I've brought this up in other chats but we speak differently in different groups. Think about it: how you speak to a friend is different from how you'd speak to your co-worker or boss. You wouldn't use the same wording for things with a child as you would with a teen or young adult. Each of us comes from different backgrounds, cultures and have a unique understanding and perspective of the world. The same should be reflected in conversations among your characters.

3) Put a little emotion into it. Watch people when they're talking. Look at their facial expressions, body movements and responses. Some people talk with their hands or shift from one foot to the other. Other people may not make eye contact or have nervous tics like twirling their hair or touching their faces. And, depending on the topic of conversation, there may be other things their faces and bodies show. These are all things to work into your dialogue so you don't get stuck on the old, "Blah, blah, blah," he said. "OH! Blabbity blah blah," she said.

4) Remember your lead-ins and closures. Mix it up! I find reading scenes that aren't set in the usual quoted text (like with my exciting conversation between 'he' and 'she' above) more fun, natural and easier to read. Using the lead-ins and closures around the conversation help us know that more is going on that just what the characters are saying. They're also responding to what's being said with their bodies. So if 'he' above says something to 'she' that ticks her off, an author can show this before she responds to what 'he' said. For example, you could lean in with something like: 'She crossed her arms and glared.' Then after she's said her mind you could close it by having her turn on her heel and storm off.

5) Watch those accents and slang. In my newest novella, "Out Of Sync", one of my lead characters has a strong Irish accent. In the first draft of the manuscript, I actually wrote his dialogue out in his accent. My writing mentor, who helped me edit that that draft, gave me some awesome advice. She said that you don't need to write in the character's accent and, in fact, it's actually annoying to a reader. If you introduce your character as being right from Ireland, for example, its pretty much understood that he'll have an accent. You can throw in a few Irish expressions from time-to-time but you don't need to have his accent spelled out. I appreciated my mentor's advice and laughed quite hard going back to read how I tried 'speaking' with an Irish accent on paper. Another thing to watch is slang. For those authors writing stories or books about gangs, mobs or other groups that use a particular language and/or slang, follow the same suggestions as with accents. Have them thrown in here and there but be sure to use them sparingly. Even Eminem and Snoop Dogg don't say, "Ya know wut ahm sayin'?" all of the time and the guys from The Sopranos have occasionally been known not to use the 'F Bomb'.

Okay, those are just a few things in dialogue. I'm positive you guys have some tips of your own you can share and we'd love to hear them! Let's talk about how to get that dialogue flowing!

Have a fabulous Labor Day Long Weekend everyone!