Virginia Woolf Was Right: a personal account of how I realized I was the luckiest writer

I once went to dinner with a guy I wanted to impress. “I’m a writer,” I told him. “No, I haven’t published anything. It’s hard to be a woman writer.”

“Women are caregivers: friends, sisters, girlfriends. We look out for people, we take relationships seriously.”

“It’s psychological.  We have that caring instinct that prevents us from committing to art.  Men can just, like, disappear and live in garrets, or grottoes, they can distance themselves. Women can’t do that. We have to exist in the world in order to be relevant. Virginia Woolf wrote that women writers need rooms of their own. We need our own spaces within which to create. And we don’t have those spaces.”

“Well, yes. But, see, it’s dangerous to be a woman who wants to live outside the boundaries of what society says we’re supposed to want.”

He looked at me for a long time. Which should have been exciting, but this look wasn’t sexy, or full of admiration. He mostly looked bemused.

“So you’re telling me that you live alone, have no family, have a decent job with decent hours, and just took two months off to travel?”

“Sure...” My voice was not nearly as strident as it had been only moments before.

“Listen,” he said. “I’m not a writer, or a woman, but I’m telling you right now: if I had a daughter who wanted to be a writer, I would tell her to go and be a writer, and that her gender had nothing to do with her ability to create art.”

Usually when you tell a guy, “I’m a woman and it’s hard,” he nods and says, “I can see that.” (The truth is, the more empathetic he is with your feminist angst, the more likely you are to sleep with him).

But this guy said what no one else would: I was using my gender as an excuse. It wasn’t that I was oppressed. I was lazy and afraid. And those states of being are not exclusive to women.

I’m not saying there isn’t a gender divide. Many women artists find themselves overstretched , overworked, and overlooked. Their struggle for equality and the right to practice art is real. But by claiming that oppression, I was only mocking those artists’ legitimate situations. I certainly did not have the right to complain about my lot in life, which in reality was pretty much Virginia Woolf’s dream.

I have a whole house of my own, an income of my own, and a supportive partner. (Four years since that embarrassing first date and we’re still together.)

Now I write every day. I’ve realized that the best thing I can do for the cause of women writers is to be one. 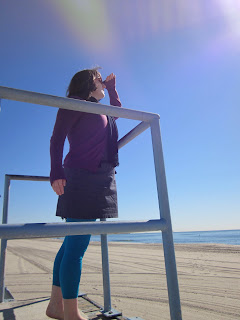 Jenny Ryan is a librarian, improv actor, and writer living in . She divides her time between Twitter and Facebook. You can read her novel-in-progress at youweregoingtobefantastic.blogspot.com.