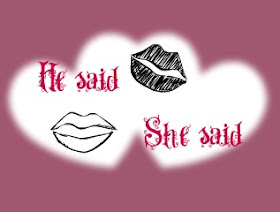 Whoa, that convo would never take place!
Ever read a novel and have that thought come to mind while perusing the dialogue? That situation happened to me this week. Twice, in fact. One incident involved a YA novel. As an educator, I hear enough teen talk to know what's real and what's phony as a $3 bill. The other time I was critiquing a short story. Everything flowed in the piece, except the dialogue. Nothing like stealing that "feel good" feeling from a great piece of literature. (Insert frown here.)
Writers need to keep dialogue real; otherwise, readers will tune out. What are the best ways to pump up the reality volume of what your characters are saying? These tips will help you fine tune your characters' messages:

Perhaps Alfred Hitchcock summed up realistic dialogue when he said, "Dialogue should simply be a sound among other sounds, just something that comes out of the mouths of people whose eyes tell the story in visual terms."

Strong, realistic dialogue adds a powerful element to a story. It's a sound clip, a byte of everyday life inserted into a new situation. Make your sound clip worth listening to.

by LuAnn Schindler. A freelance journalist, more of LuAnn's writing can be found at her website.