Friday Speak Out!: Potty Tales: How Toilet Training Made Me a Writer Again, Guest Post by Julie Duffy

Potty Tales: How Toilet Training Made Me a Writer Again

A moment before, I had been hunkered down on the hardwood floor, gazing at him adoringly as the afternoon sunlight sparked the reds and golds in my beautiful son’s impossibly long eyelashes.

Now I was trying to keep the words “half Nelson” from flitting through my mind as I, um, encouraged him to stay on the potty.

I couldn’t give up. Not again. But I knew this little boy was far more persistent than I. We had tried watching TV while we waited. We had read all the books and sung all the songs.

In desperation I began to vamp, “Once upon a time, there was a little boy named...”

He stopped struggling and looked around for the book. When I announced that the boy in the story had the same name as he did, well, you should have seen those eyes widen--they half-filled his baby face.

He sat perfectly still. He relaxed.

I fought down a decade-long case of writer’s block and took one step into the story.

The Birth And Death of a Writer

I was like most of you: a writer from my earliest age. I scribbled before I could write. While other nine-year olds were struggling to put together six sentences I was gleefully writing six-page epics, stopping only because the teacher snatched the notebook away and sent me home. I wrote for fun. I had a poem published in an anthology at 10, and at 12 I would tell anyone who asked that I was going to be A Writer.

And then it all went wrong.

At secondary school I suffered the double-whammy of Discovering Boys and being forced into inept analyses of great works of English literature. And it only got worse at university. Studying the great works of great writers in the hallowed halls of an ancient university it became crystal clear: I could never be a writer. I was tongue-tied, insignificant and deeply unworthy.

Desperation: The Mother of Accomplishment

But now? In my desperation to entertain the boy, I had created a fan.

Now I was staring at an upturned face, rapt, uncritical, waiting to be carried away on the next wave of the adventure. Now, if the pace was lagging, if the story was boring, if the words were too complicated, my audience threatened to get up and walk away (and create a ‘cleaning opportunity’ I could live without).

Now, if my story was good, he stayed on the potty. I was motivated, he was enthralled.

And I realized that I could tell stories. I told them at potty-time, at bed-time, to divert tantrums, on walks and in the car. They didn’t have to be ground-breaking or literary or trendy. They had to capture the imagination of one person. And, I reasoned, if I could hold the attention of this small, squirmy boy, then I must be one helluva writer.

And with that, I began to write again. 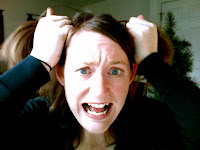 Julie Duffy is the host of StoryADay.org and the Story A Day May Extreme Writing challenge (http://storyaday.org/). She is also the author of several workbooks that help writers on their creative journey.