When Did You Start Using the W-Word? 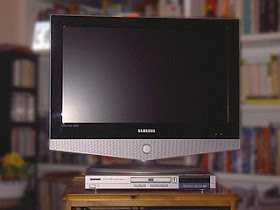 TV EXECUTIVE: God, I hate these pitch sessions for the next season. Next!

ME: Hi, I’m Jodi Webb. I’d like to pitch a reality show called “No Excuses”.

TV EXECUTIVE: Like the title. So what does it have? Bigamy, public drunkenness, backstabbing, romantic triangles?

TV EXECUTIVE: Of course, all reality shows have writers.

ME: No, I mean it’s ABOUT writers.

TV EXECUTIVE: OK, this could work. Writers have scandal. Who was that memoir guy who lied on Oprah? Didn’t Poe die in a drunk in a ditch somewhere?

ME: Ummm, the Oprah guy was James Frey and Poe actually died in a hospital but I think we’re getting off track here…

TV EXECUTIVE: OK, rewind. Writers, what about them?

ME: I thought we could follow them around as they go to cocktail parties, the PTA, Zumba class, their class reunion and when people ask them what they do they actually say, “I am a writer.”

TV EXECUTIVE: Because normally they say…

ME: Anything but! “I’m a teacher. I’m a coffee barista. I’m a mom. I’m retired.” Or this is a favorite, “I write a little but I’m not really a writer.” Nobody ever mentions the W-word, especially if they don’t have a book published with a big publisher.

TV EXECUTIVE: Well, if someone hasn’t published a book are they REALLY a writer?

TV EXECUTIVE: Settle down there, missy. But isn’t being paid for your writing what makes you a writer?

ME: Being a writer isn’t about a paycheck. It’s a skill. It’s a state of mind. Those people that sing on American Idol aren’t getting paid—would you argue that they aren’t singers? OK, maybe not the weird people who can only sing in one key but...Then there’s Van Gogh. Didn’t he sell like two paintings while he was alive? He sure didn’t support himself with his paintings. Are you going to tell me Van Gogh wasn’t an artist? Emily Dickinson’s poems weren’t published until after her death? Not a poet? So why do we place a price tag on the label “writer”? People should be able to go out their in the world and say those four big words I – AM – A – WRITER with no explanations, no embarrassment, no excuses.

TV executive stands up and pushes a button that opens the office door.

TV EXECUTIVE: Without any sex we’re going to have to pass but…

Reaches into his bottom desk drawer, pulls out a manuscript, and hugs it to him.

TV EXECUTIVE: I AM A WRITER!

Unfortunately, there will be no open auditions for No Excuses but we’d still like to know when did you start calling yourself a writer? And if you don’t, what goal will you have to meet to start referring to yourself with the W-word?

Jodi Webb started calling herself a writer after a customer told her "if she had stayed in school she'd have a better job". Find out more about that life-changing moment at Words by Webb.

ATTENTION: If you're looking for some exposure for your blog, contact Jodi about participating in the Everybody's Writing About...Surprises on March 16 at The Muffin. You and your readers could win fun prizes! More info at jodi@wow-womenonwriting.com .