The Problem - and Reality - of Adding -LY 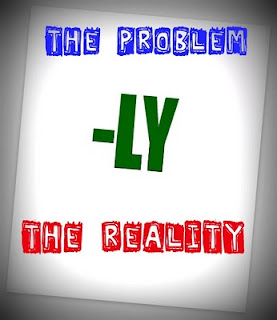 As an editor, I received daily submissions filled with adverbs. The part of speech attempted to modify verbs, adjectives, and other adverbs, but most of the time, the lone adverbs did not add anything to the storyline or article.

"I actually wish I knew what the future holds."

"He genuinely likes me."

See what I mean? The adverbs did not jump out and show me anything except a tired cliche dressed in an outfit that doesn't fit.

Then I'd look at a different manuscript, where the writer tried adding an -ly to every dialogue tag.

"I can't make it!" she screamed loudly. (Loudly? No kidding. She's screaming.)

" Listen to me..." he silently whispered. (Are you telling me there's a loud whisper?)

You get the point.

What's the problem with an adverb? In most cases, the adverb can be left out. If it's not adding a new element to the story, why insult the readers' intelligence by adding a word that makes a poor attempt at explaining the how, where or how much of a story. Readers hear the tone of words in their own minds and do not need an adverb, especially a weak one, to reinforce the author's intent.

But I'm also a realist when it comes to penning adverbs. Sometimes, they are necessary. And sometimes, when paired to make an impact, the adverb makes prose pop!

What's the trick? Convert a powerful adjective into an adverb by adding the -ly and pair it with an unusual word. Think devastatingly gorgeous, preciously righteous, drippingly scarce. Each of these examples gives a new sense of meaning to an otherwise tired word.

The end result of strange word pairings elicits a shift in tone, creates a powerful metaphor, develops a rare oxymoron, or stretches the imagination. In some cases, all of the aforementioned.

Adverbs have a place in a piece of writing, but if a writer fails to remove the old and worn out meaning and offer a vibrantly fresh example in its place, the intended effect falls flat.

As a writer and editor, I look for those strange marriages between modifier and modified word. It forms a unique image in the readers' minds. And, it provides a challenge to formulate a refreshing duo of words.

by LuAnn Schindler. To read more of LuAnn's writing, visit her website.