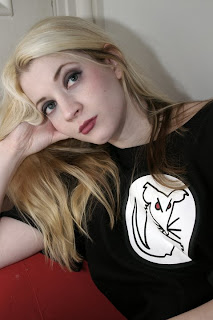 I'm going to a world premiere this weekend. And no, I'm not at Sundance. I wish! This weekend I've been invited to the premiere of a documentary about the local author of three (working on number four) urban thriller books. As authors we've all been told a thousand times "You're job's only halfway done when you finish the book. That's when the marketing begins." What do you picture when you think about marketing a book?
That's the standard plan. It's true, interviews reach the people who read them. But if you ask me (a person who's been knee deep in many authors marketing plans through my work with WOW Blog Tours) the best marketing is the double marketing. It reaches your first, intended group and then it reaches a second group simply because people are talking about your wild, crazy, unusual, fill-in-the-blank marketing. Trust me, no one will blog about you because you had a book signing at your local Barnes and Noble.
Stephen Pytak, the author who is the star of the documentary this weekend, is a champion at double marketing. Along with the standard marketing plan he's done several crazy things and each time it gets him a mention in local news or the blogosphere and hopefully, renewed interest in his .40 caliber mouse book series. What has he done? Just dying to know aren't you?
These unusual marketing plans not only reached the people who attended the parties, saw the girl in the t-shirt, or wore the mask but they also got people talking, garnered him coverage in the print media, and ended up online. You're reading about him here, aren't you?
So when you're designing your marketing plan include the old standards but also ask yourself...what can I do that's memorable?
On another note I want to let everyone know that on March 16 WOW Blog Tours will be holding Everybody's Talking About...Surprises to promote Kristina McMorris's novel Letters from Home. To participate blog about surprises and include a paragraph about Letters from Home. You and your followers could win a World War II themed prize. Not to mention the publicity your blog will get on The Muffin. To sign up contact me at jodi@wow-womenonwriting.com.

Related article: Real Stories of Authors on a Budget: Promotional Gimmicks
Jodi Webb at 4:42 AM
Share